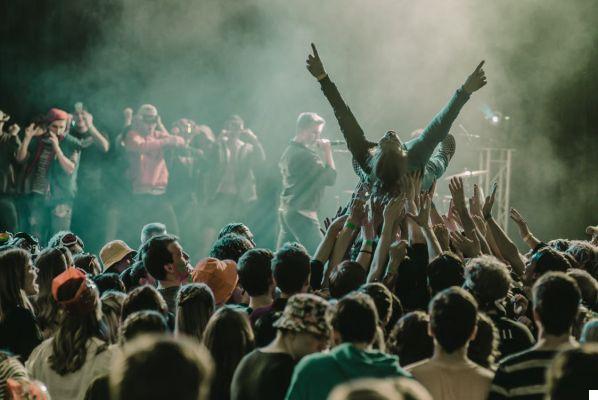 Do you like to enjoy good music and travel at the same time? If so, today in Topfestivales, you are going to know new music events in a city that we have not talked about so far. Today we bring you a selection of the best festivals in Granada.

Music festivals in Granada that you have to know about

Today we are going to focus on the music festivals that take place in Granada, where you will find some of the most famous of the national scene. Are you ready to vibrate to the rhythm of the different musical genres? If you are interested in the south of the peninsula and want to know more about the rest of the events that take place in its different cities, in Topfestivales you can also find out about the best festivals in Andalusia.

Granada Sound is a festival that takes place in the city that gives its name to the festival, Granada, located in the south of the peninsula. This festival is held in the Paseo del Cortijo del Conde.

Granada Sound is the perfect festival for lovers of independent music as this event focuses on this musical genre, although you can also hear pop rhythms. Vestusta Morla, Xoel López, M.O.D.A, La Habitación Roja, Zahara, Alicia Wonder or Ivan Ferreiro among others, are some of the artists who have been present in previous editions.

Apart from music you can also enjoy bars and restaurants within the same enclosure, shops and multiple free activities that take place throughout the day.

The Zaidín Rock Festival or Zaidín Rock is another of the best festivals in Granada and is held in the Zaidín neighbourhood. This event fills numerous streets and squares of the Zaidín neighborhood with its varied music, because although it was originally just rock, nowadays you can listen to other genres such as salsa, blues, flamenco or mestiza or singer-songwriter.

This event as well as being completely free and open to all audiences, brings together every year the best artists and international groups and the most prominent figures of the national scene, so it gets, every year, gather crowds of people in their shows. It has also become one of the leading festivals in Europe.

Artists such as Juanito Makandé, The Locos, Holograma, Mojinos Escozios, Knights Blood, Billy Monkeys, Huecco, Celtas Cortos, El Niño del Albaicín or Sinkope are some of those who have made up past editions.

Bull Music is a festival held in the city of Granada, specifically in the Cortijo del Conde, a place where other festivals are held in the city as the Granada Sound. In this festival you can enjoy the best of pop-rock, mestizaje, rap or fusion music.

In previous editions the festival managed to exceed 25,000 attendees, making it an essential festival in this Andalusian city. Artists such as Kase.O, SFDK, El Kanka, Fuel Fandango, Mala Rodríguez, Ayax y Prok, Green Valley, El Canijo de Jerez, Antílopez, Maka, Fernandocosta, Recycled J, Mr. Kilombo or Tribade, are some of those who have been enjoyed.

The Festival de Jazz del Lago is a music festival for lovers of the jazz genre that is held in the town of Atarfe, in Granada. Specifically the event is held in the natural setting of the Ermita de Los Tres Juanes.

This festival is becoming more and more popular every year and welcomes the most outstanding jazz personalities on the national and international scene.

Cuban Jazz Syindicate, Joana Cebolla, Ahetty Kate or Big Band de Atarfe are some of the groups and artists that have been enjoyed in this festival in Granada.

International Festival of Music and Dance

The International Festival of Music and Dance is one of the most important and attractive cultural events in Spain, and is held in the city of Granada. This event takes place during the months of June and July and the place where it is held is one of the most incredible: the palaces and gardens of the Alhambra. In addition, other shows are also held in the streets, squares and monuments of the city itself.

This festival has brought together nearly 60,000 spectators, bringing together tourists from all over the world. This festival is undoubtedly one of the best festivals in Granada.

The International Festival of Music and Dance is focused on classical music, opera and flamenco, as well as making incursions into ancient and contemporary music . In addition you can also enjoy ballet, Spanish dance and flamenco shows.

The Flamenco Festival in tribute to Tío Miguel is a practically new musical event, as its first edition took place in 2018, which takes place in the city of Granada.

"Tío Miguel" was an art and flamenco lover who cultivated his passion and love for flamenco throughout his life, and in the city of Granada they wanted to pay tribute to him by dedicating this festival to him.

During the days that this event lasts, the Peña Yerbabuena enclosure is filled with dance, guitar and singing by the hand of flamenco artists such as Jaime Heredia, el Chichi de Alcalá, Chato de Vélez, Jose El Canela, Antonio Trujillo, El Rubio or Joselito Montoya, who were some of those who made up the first edition held in 2018.