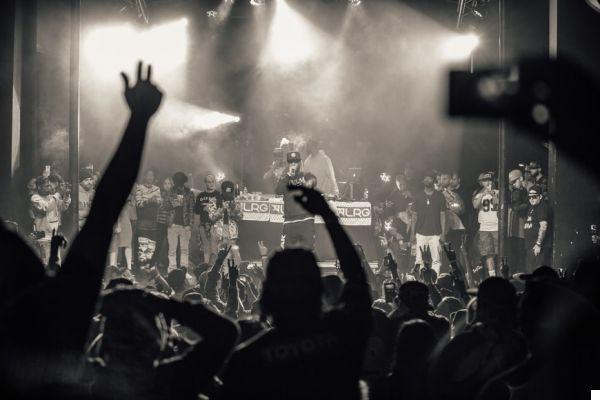 Are you a rap lover? This musical genre began to be known around the world from the 2010s, and Latin America has seen the birth of many of the rappers who, with this style, achieved great international fame.


Today, in Topfestivales, we tell you who are some of the best Latin rap singers, do you want to discover who they are?

If you are a lover of the rap genre, prepare your ears and buckle up, because today we travel to Latin America. This country saw the international growth of this genre in the 2010s and with it the birth of many new Latin artists.


So, today from Topfestivales, we want to tell you who are some of these best Latin rap singers. Do you dare to find out? Because this starts now!

Ana Tijoux is a Chilean singer and composer of rap music, although her music is also in dialogue with the sound of hip hop fusion. This artist uses her lyrics to denounce social and cultural issues, while positioning herself in favor of women's rights.

She has worked in several countries such as Latin America, Europe and the United States, and has been recognized by several media as the best and most popular rapper in Spanish. She has also been nominated several times for Grammy Awards, and her best known work is the album she released in 2014, Vengo la canción, specifically the single"Antipatriarca".

Some of the best known songs of this Latin rap singer are 1977, Mi Verdad, Sacar la Voz, Shock, Mal, Doo Wop- That Thing or Antipatriarca, among others.

Ariana Puello is a composer and actress of Dominican origin, who came to Spain at the age of eight, so you can say that she is a Spanish artist. In addition, it should be noted that this artist was one of the first women to make her mark on the Spanish hip hop and rap recording scene.

The album"Gancho Perfecto", is the one that takes her to the head of the female representation of Spanish hip hop, consisting of 17 tracks with collaborations of artists such as: Mr. Tcee, El Meswy, Fout, Esmit, Nomah and Frank T.

She has also made sporadic collaborations as an actress participating in two feature films and two short films. But the most important role she has played was in the movie "Mi Dulce", in 2007.

Oye lo que traigo, Por Qué Será, Juana Kalamidad, Arriba los buscavidas or Rap Pa Mi - Pa Ti, are some of the most listened songs of this rapper in platforms such as Spotify.

Valentin Oliva, popularly and artistically known as WOS, is another one of the best Latin rap singers. An Argentine rapper and freestyler, specifically from Buenos Aires. This singer began his career in rap battles among freestylers, and was champion on several occasions of the famous Argentinean competition El Quinto Escalón.

In addition, he was also champion of the FMS Argentina 2018 and the Red Bull Batalla de los Gallos 2018 international tournament.

But he really starts his musical career in 2018, with the release of the single Púrpura, in which a more aggressive rap can be highlighted, and in 2019 he releases his first studio album, Caravana. He has also been nominated for the Latin Grammy awards for best new artist.

Some of the most listened songs of this great Latin rap singer are Melón Vino, Mira Mamá, Alma Dinamita or Sangría, among others.

Mauricio Hernandez Gonzalez, artistically known as Mau or Azino, is a Mexican rapper and freestyler rapper and one of the best known and influential today.

He began his career in 2007 participating in rap freestyle battles, specifically in the 2v2 Street Freestyle tournament where he performed under the pseudonym Asesino Serial. In early 2013 he releases the album "Psicofonía" and also has a role as a judge in the National Final of Red Bull Batalla de los Gallos Mexico.

The following years he participates in numerous more freestyle battles and takes first place in some, until 2020, which was pronounced as retired from freestyle rap competitions.

Eternamente, Traviesa, Bzrp Freestyle Sessions, Aczino VS Wos - final or 911, are some of the most listened songs of this Latin rap singer artist on platforms like Spotify.

Tego Calderon is another one of the best known Latin rap singers. He is a Puerto Rican singer and composer. Although he is considered one of the pillars of reggaeton, for his social lyrics and his classics in the 2000s, in his songs we also highlight features of other styles such as rap, reggae or rumba.

This artist has also received numerous awards such as a Source award for Best International Artist of the Year and has also won the Latin Grammy Award in 2015 in the category of Best Urban Music Album for the album El que sabe, sabe.

Songs like Pa' Que Retozen, Punto y Aparte, Al Natural, Dominicana, Es Un Secreto or Jangeo, are some of the most listened songs of this Puerto Rican rapper. Is this one of your favorites?

Luis Armando Lozada, popularly known by his stage name Vico C, is an American rap singer and songwriter, although of Puerto Rican origin. It is true that in some of his songs you can also appreciate traits of other styles such as rap or reggae. reggaeton or reggae.

This artist is also considered one of the pioneers of Spanish rap for songs such as Bomba para afincar, as well as an icon of Hispanic music. Many others also consider him to be one of the founding fathers of reggaeton.

During his career he has released numerous studio albums, and some of his most popular songs are Lo Grande Que Es Perdonar, Me Acuerdo, 5 de Septiembre, Quieren or Desahogo, among others. Is he one of the best Latin rap singers? Let us know what you think in the comments!

Known by his stage name, Residente, is a singer, composer and producer of urban music, specifically in the genres of rap and reggaeton. In addition, he was a member and vocalist of the famous group Calle 13, from 2004 until 2014, where he began his solo career.

In the lyrics of this rapper's songs we can highlight his social and political content, and the combination he makes of world music with alternative rap. In addition, in his solo career he has managed to win up to 5 Grammys, not counting more than 20 Latin Grammys he won during his work as a vocalist in Calle 13.

Flow HP, Bellacoso, René, Desencuentro, Pecador or Antes Que el Mundo Se Acabe, are some of the most listened songs of this great rapper on platforms like Spotify.

José Fernando Cosculluela Suárez, better known as Cosculluela, is a rapper and composer originally from Puerto Rico. His music is not only focused on rapHis music is not only focused on rap, but also on reggaeton and his beginnings in music date back to the year 2000. In addition, he was part of record companies such as: Warner Music Latina, White Lion Records and Buddha's Family.

Some of his most successful songs are: "La Boda", "DM", "Manicomio", "Prrrum", "Pretextos" (with Maluma), "Te Busco" (with Nicky Jam) and "Madura". (with Bad Bunny). It is worth mentioning that he is called "the prince of the verse" and has 7 musical works: 3 compilation albums, 2 mixtapes and, of course, 2 studio albums. He has also been nominated for Latin American Music Awards, Premios Juventud and Latin Grammy Awards.

Likewise, we mention that his albums have featured collaborations with different artists, among them, Daddy Yankee, Arcángel, Tempo, Ñejo, Farruko, Wisin & Yandel and Natti Natasha.

Pedro Elias Aquino Cova is a rapper originally from Venezuela, winner 3 times of the freestyle Knockout in his native country. In addition, he won in 2014 the title of "God Level". in a rap competition that took place in Chile. Likewise, he has participated in music festivals such as the. "Lima Hip Hop International Festival".

As a curious fact, we mention that Akapellah's popularity began after publishing several amateur videos. Later he released his first album titled "As before". In addition to this, on instagram he has more than 1 million followers, below we leave you his profile so you can be aware of his upcoming concerts and presentations.

Ignacio Fornés Olmo was born in Albacete, Spain. He is a composer and rapper who has been active in music since 1994. active in music since 1994.. At that time he released his first demo, "D.E.P.". He is one of the best Latin rap singers, so he could not miss in this top, because of his career and collaborations with other artists (Juaninacka, Aniki, El Chojín, ZPU, Madnass, Rapsusklei and Ismael Serrano).

In addition to this, he has recorded several LPs, in fact, "Un día en Suburbia'' received a gold record, as did "Mejor que el silencio". In the same way, he has toured Latin America, for example, his 2012 tour "Latam Tour" through which he rapped in Venezuela, Colombia, Mexico, Ecuador, Chile, Peru and Argentina. As if that were not enough, several of his songs have more than 1 million plays on his YouTube channel. Such is the case of "Efectos Vocales" (47 million), "Chico Problemático" (10 million) and "El idioma de los Dioses" (43 million).

Aldo Roberto Rodríguez Baquero is originally from Havana, Cuba and his beginnings in music started in 2003, when he founded the rap duo "No soy Criminal". "The Villagers". Their first work was titled "Censurados". Also, you should know that this duo managed to bring together two generations of Cubans with different musical tastes such as techno, trova and rock.

In 2008, the members of this duo were awarded the following recognition "Best Rap Group in the Festival organized by the television channel Cuerda Viva. By the way, you should also know that in 2010 the duo began to go viral, already on the international scene. We also mention that they have toured Venezuela, the United States, Argentina and Spain.

Marlon Morales is a Venezuelan rapper and, undoubtedly, a reference of the genre in the Spanish-speaking world. He began his career in 2000 and since then he has been able to maintain his essence. Also, we inform you that Lil Supa is very admired by other rappers of his country, such as Akapellah, with whom he made a collaboration, "Funky Fresco". This track mixes several musical genres such as: funk, trap and rap.

Lil Supa has traveled through Europe, Asia, United States and South America. Some of his most popular songs are: "Luz", "Ímpetu", "Valórate", "Mista Uanteik" and "'99". Likewise, you should know that this MC also ventured into hip hop culture as a breakdancer and graffiti artist.

What do you think of this list of Latin rappers? If you liked it, you must go to one of the concerts they give around the world. Follow live the lyrics of these artists who, without a doubt, have rhymes and ideologies that adapt to the Hispanic American culture.