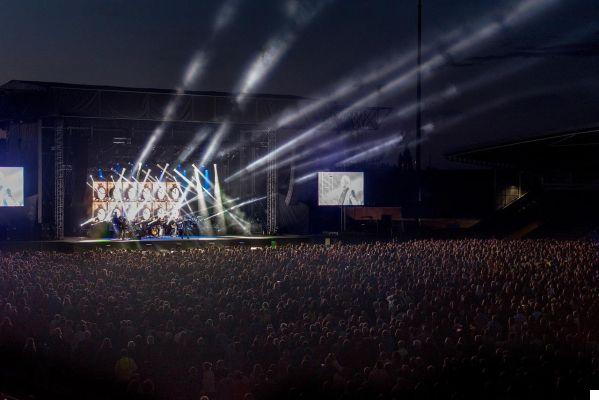 The 10 best pop music festivals in Europe that you should know.

Know what are the pop music festivals that take place in Europe and are a reference in some countries such as Rock in Rio Lisbon, Bilbao BBK Live and Sziget Festival. However, you should know that these festivals are not exclusive to pop, as they include other genres. Let's start!

This festival is attended by people from more than 60 countries around the world and the British magazine "The Independent" in 2011 ranked it as one of the best festivals in Europe. Sziget takes place in Budapest and has 28 editions.

Some of the pop artists who have performed are: Ed Sheeran, Rihanna, Dua Lipa, Justin Bieber, Shawn Mendes, among others. Due to its incredible posters has come to congregate more than 400,000 people in its most popular editions.

The festival Rock in Rio takes place in Bela Vista Park, a park in the city of Lisbon with an area of 85,000 m². The first edition of this event was held in 2004.

Famous artists have passed through its stage such as Shakira, Britney Spears, Miley CyrusAlejandro Sanz, Justin Timberlake, Katy Perry and Bruno Mars. In addition, we mentioned that more than 345,000 people enjoyed the 6th edition of Rock in Rio Lisbon..

Another one of the best pop music festivals in Europe is the Primavera Soundwhich is based in Barcelona, Spain and in the 2015 edition had an attendance of more than 190,000 people. 190,000 people.

There, singers and groups of various musical styles such as indie, electronic, pop and urban are presented. In addition, its posters feature a large number of artists.

It was held for the first time in 2006 and is considered one of the best pop music festivals in Europe. In addition, in it you can enjoy various genres such as rock, indie and electronica.

The Bilbao BBK Live Has received some Fest Awards such as "Best large format festival" (2014) and "Most technological festival" (2018). Similarly, we mention that in 2019 it had an attendance of 112,800 people.

The Mad Cool is one of the most important festivals in Spain and we include it in this list because despite being only a few years old, it has come to concentrate in its first editions more than 100,000 people.

In addition, it has had good posters with groups and artists such as Imagine Dragons, Dua Lipa, Zara Larsson, Zara Larsson, among others. So, if you live in Spain, do not miss this impressive festival.

It originated in 1995 and attendees have been able to enjoy their favorite pop artists or other genres of music such as electronic, indie, rockDo you like these musical styles? Come to this great festival.

In addition, it is worth mentioning that the Benicàssim International Festival or FIB as it is also known, has an average attendance of40,000 people. Also, you should know that it takes place in Spain, specifically in Benicasim.

It is a somewhat young festival, since it had its beginnings in 2016 and is based on the musical genres pop, rock, jazz, among others. It had in its fourth edition an attendance of 90,000 people.

Also, we mention that it takes place between the months of June and July in the city of Madrid (Spain). The Lumineers, Molotov, Bomba Estéreo, Nathy Peluso have been some of the artists and groups that have performed at this festival.

The Open'er Festival is held in the city of Gdynia (Poland) and has won 3 times the award "Best Festival" at the European Festival Awards. The event is organized by Alter Art.

People who want to attend the festival can enjoy a variety of music from pop, rock, indie and electronic. In addition, we mention that in its stage have been presented. Coldplay, Lana del Rey, PlaceboGorillaz, among others.

Los40 Primavera Pop The festival had its first edition in 2007 and the event is in charge of the radio station Los40. Some artists such as Melendi, Belinda, Enrique Iglesias, Pablo Alborán, Aitana, Lola Indigo, among others, have participated in it .

It is one of the festivals that has in its posters many more artists of this genre, since the others that we have mentioned include several musical genres. If you love pop music, you should not miss this festival.

It has been held in Paris (France) since 2017 and has had great acceptance by the public, reaching an attendance of more than 100,000 people. Incidentally, Lollapalooza Stockholm (Sweden) is also popular, as it features excellent international artists.

We hope you liked this top with the best pop music festivals in Europe and that, if they are held in your city or country, you have the opportunity to live the experience. Tell us which is your favorite festival?

add a comment of Best pop music festivals in Europe