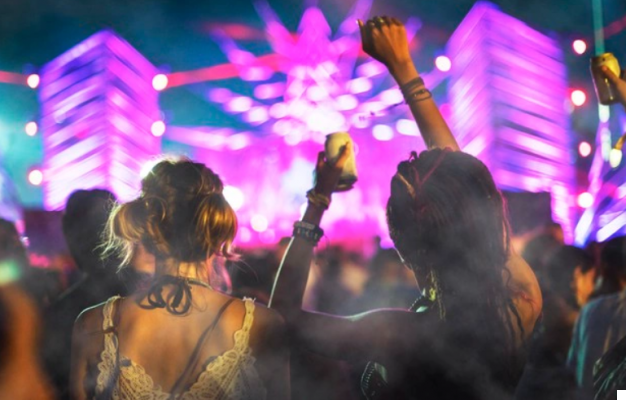 If we say SUMMER, we say PARTY, but where? Do you need to know options? Don't worry because from Topfestivales we bring you a list with the best summer festivals in Spain that will make your season a delight.

Summer festivals abound in Spain. From Seville, Malaga, Murcia, to Madrid, Barcelona, the Basque Country and San Sebastian, this summer we're going to party, and you have to be there!

15 summer festivals in Spain that you can't miss

All styles, electronic, reggae, rock, Celtic music, indie, pop, etc.; with the best artists and for all tastes. An abundant menu that doesn't get boring. Get ready to start the tour ;)

We begin this review of the best summer festivals in Spain with the BBK Live. In the cosmopolitan city of Bilbao, in the north of Spain in the Basque Country, BBK Live takes place. A festival of electronic and rock music that brings together international artists of the highest level.

The festival has established itself in recent years as one of the main festivals in the country and a must for lovers of modern and alternative music.

For three days, thousands of people live together in the open air, camping and enjoying the concerts. With bands like Gorillaz, The Strokes or Frank Ferdinanz you will forget everything for three days.


An ideal festival to have a great time, with the best rock, indie, pop, a spectacular installation and mountain camping.

Located on the coast of the municipality of Velez-Malaga, in the town of Torre del Mar is the Weekend Beach Festival. This festival has become one of the favorites, as it brings together the beach with the best and most varied national and international music.

The camping area is located next to the Poniente Beach and only 10 meters from the festival site. Making your stay an incomparable comfort. Artists such as Ozuna, The Black Eyed Peas, Ska-P, Nathy Peluso, Laurent Garnier, among many others, have performed at the festival.

Without a doubt, this is another of the best summer festivals in Spain. We also love the international festival of the Celtic world of Ortigueira. This festival was declared a Festival of International Tourist Interest because you can go with very little budget, as the festival is free, both the concerts and the free camping area near the beach.

The quality of the groups that gather every year as Carlos Nuñez, Imar or Yves Lambert Project, National youth pipe band of Scotland, among others, and the organization of the festival make the Festival of Ortigueira a point on our map. Undoubtedly, it is one of the best festivals in Galicia that is a must for lovers of good music.


In the town of Ortigueira there are several stages distributed in different areas, all of them connected with each other and with the camping area with a bus service to enjoy the parades and cultural activities during the day, the official concerts at night and the extra official party that is organized in the camping area until dawn.

Also if we have energy left the festival is beautiful and offers many charming places to visit such as the cliffs of Loiba.

This festival is one of the oldest jazz festivals in Europe, and is characterized by always having a spectacular line-up.

If you're a jazz lover, then don't hesitate and take a trip.

The Low Festival takes place in Benidorm, Alicante. In this case there is no camping area but you can use any of the city or any of the many hotels that Benidorm has, as it is one of the cities with more tourist beaches in Spain.

And it's worth it! Because this festival is one of our favourites. Artists such as Primal Scream, Metronomy, !!!! (Chk Chk Chk Chk), Temples, White Lies, the best of the best, and varied in rock, indie, punk, electronic and pop.


Low Festival is beach, sun and live music, with large green areas for relaxation and VIP areas with swimming pool and unlimited beer! Gourmet restaurant (with vegetarian and celiac option) sun loungers and umbrellas. At Low Festival you will enjoy an unbeatable atmosphere and the good vibes of the Lowers.

The Botanical Nights is a festival that brings about 15 consecutive concerts in the summer. In total more than 50 groups and artists usually pass through the stages of the Botanical Garden of the Complutense University.

The Botanical Nights festival in Madrid is an unparalleled experience. A festival for all ages and all tastes.

Some of those who have gone through this festival are: Love of Lesbian, Iván Ferreiro, Andrés Suárez, Fangoria, Nancy Rubias, Isma Romero, Diego El Cigala, Estrella Morente and Kiki Morente, Rosario, Niña Pastori, Naty Peluso, Woodkid, Ismael Serrano and so many others. You can't miss it!

The Benicássimm International Festival (FIB) has been held every year since 1995. This event held at the Benicásimm concert venue becomes for a few days the centre of attention of the alternative world of pop-rock and electronic music in Spain.

With a call for the international bands of the moment and a platform to promote not only music but also various creative disciplines such as dance, theatre, sculpture and the world of short films, the legendary Benicásimm festival is a must.

Bands such as Muse, Hives, Kasabian, Russian Crab, Varry brava, Hidrogenesse, Ley DJ, Pet Shop Boys, The Killers, Red Hot Chilli Peppers are just some of those who have played.

The countdown is on for your next summer of music and partying!

And if we're talking about bands, you can't miss the DCode festival in Madrid. A perfect festival to close the summer that takes place on the campus of the Complutense University of Madrid. A line-up with a dozen of the most prominent international artists for music fans.

Some of those who have passed through this festival are: Queen of the Sotne Age, Vtusta Morla, Fuel Fandango, The Hive, Milky Chance, Sidonie, Belasko, ST Woods just to name a few.

At the Santander Music Festival you will find the best national and international bands in a unique setting. La Magdalena has everything, sand, sea, music, to sing, hug and toast.

With gastronomic stalls and relaxation areas, Santander Music is a complete festival to enjoy with your friends.

If you like concerts and enjoy the summer do not miss this festival that gives it all!

Every year it is again the summer music event in the province of Zamora in the auditorium Ruta de la Plata. With great call and poster AND Festival has everything to offer.

At AND Festival we find a diversity of musical styles ranging from folk pop, indie rock to post punk noise. Some of the artists who have been here are: LA M.O.D.A, La Habitacion Roja, Arde Bogota, El lado Oscuro de La Bronca, among others.

The Nights of the Malecón (Murcia)

Las Noches del Malecón is a festival held in Murcia Río, a landscaped pedestrian walkway next to the Segura River in which there is no shortage of green areas, as well as a direct view of the riverbed with lighting and a square-viewpoint.

With two stages located in this magical geography, Las Noches del Malecón offers a varied line-up with the most outstanding artists of the moment.

Some of the artists who have passed through the festival are: Juanito Makanadé, Nach, Dvicio, India Martinez, Camilo, M-Clan, Carlos Sadness, Ladilla rusa, Love of Lesbian, Izal, among others. As you can see, it is another of the best summer festivals in Spain essential.

Rototom Sunsplash is Europe's biggest reggae music festival. With a perfect location next to the beach in Benicassim, Castellón. The festival has been held for more than 20 years.

Rototom Sunsplash sounds reggae and Ska, African Beat and even Jazz and Soul. Great artists of these styles have passed through the festival such as: Jimmy Cliff, Ben Harper, Far Freddy's Drop, Alborosie, Alpheus, The Uppertones, Tarrus Riley, Danakil, Holie Cook, Morodo, Green Valley among many others.

The philosophy of the organization is to promote human rights and social justice, the festival was recognized by UNESCO for its promotion of the Culture of Peace and Nonviolence.

Arenal Sound is a festival that takes place in Burriana, Castellón. It is characterized by its mix of independent music, electronic, trap and reggaeton, emerging artists and more.

With one of the stages on the sand of the beach, Arenal Sound is unique and different from the rest. In addition to its affordable prices compared to the rest of the festivals.

Some of the artists who have passed through the festival are: Bud BunnyStve Aoki, Maldita Nerea, Dorian, Lost Frequencies, Crystal Fighters, among others.

Rock Fest Barcelona is the most famous rock festival of the summer . It is held in the park of Can Zam in the town of Santa Coloma de Gramenet. It is known for bringing mythical bands of national and international rock in the posters of each edition.

Bands such as Kiss, Scorpions, Ozzy Osbourne, Halloween, Mago d eOz, Judas Priest, Porretas, Megadeth, Sober, among many other well-known groups have played here. If you are a rock fan, this is your place!

The Primavera Sound festival is held every year in Barcelona. It is a musical event that brings together the most cutting-edge groups of the moment, both nationally and internationally.

Electronic bands mix with punk and revival bands. The Primavera Sound festival is one of the most popular ones.

You know, the fun is guaranteed in the summer, gather your things that we are going to party ;)

add a comment from Best summer festivals in Spain