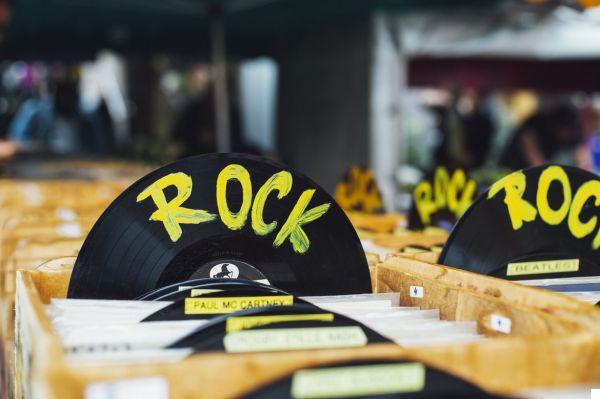 Are you a rock lover? This musical style is a great bet, since it is a very complete genre that has the integration of numerous and diverse styles of popular music. Since its birth in the United States during the last century, rock has done nothing but spread and see the birth of great artists. Do you want to know who are the current famous rock singers? We tell you from Topfestivals

The famous rock singers that you have to know

The rock genre is a very complete one that often presents new, stronger, more extreme and challenging forms. Undoubtedly a genre for the most daring, and from Topfestivales we know that many of you are. In other occasions we have talked about the most outstanding rock figures in the history of the genre, but today we are going to focus on the current scene to meet the current famous rock singers. Do you have any idea which artist meets the requirements to be in this selection?

Brittany Howard is an American singer and songwriter, who started her solo career in 2019 after the release of her debut album Jaime.

This artist is present in this selection of current famous rock singers because she is the vocalist of one of the most listened rock bands of the moment: Alabama Shakes. This band directs its music towards a specific style, southern blues rock, and has already won four Grammy Awards.

Stay High, Short and Sweet, He Loves Me, You'll Never Walk Alone, Always Right, Sound & Color, This Feeling or Hold On, are some of the most listened songs of this artist, both solo and with the band she belongs to.

Carolina de Juan is a Spanish singer, specifically the lead singer of the Madrid rock band known as Morgan. This artist is one of the best female pop-rock voices in the national scene. She is known artistically as"Nina".

The group Morgan is one of the revelation soul rock groups of the moment, and if we add Nina's voice, who is becoming one of the famous rock singers of today, the result is an explosive mixture of sounds and sensibility.

This group still has a long way to go to grow internationally, but without a doubt a great success awaits them. For those of you who didn't know them, we recommend you to listen to some of their songs: Sargento de Hierro, Volver, Home, River or Another Road.

You can tell us what you think about them in the comments ;)

Damiano David is an Italian singer, specifically the lead singer of the Italian rock band that is currently sweeping the world, Maneskin. This group has achieved great international success after winning the San Remo Song Festival, which led them to participate in Eurovision 2021, a contest in which they also managed to take first place.

Maneskin, with their performance of the song "Zitti e buoni" at Eurovision 2021, just jumped to fame and since then songs like Chosen, Beggin', Torna a casa, Mammamía or I Wanna Be Your Slave, do not stop being heard in all the radio stations and programs.

Have you ever heard of this band before, and do you think this artist deserves to be among the best famous rock singers of today?

Diego Ibañez is a Spanish singer, specifically from Madrid, who is known thanks to his musical contribution within the group known as Carolina Durante. This group was formed in 2017 and, although we cannot define it as a rock band, apart from pop or punk rhythms, they also play with rock rhythms.

During their few years of life, this band has done nothing but grow in the world of music, and their popularity is becoming more and more widespread among the national population. In addition, this band has participated in some of the most famous festivals in Spain such as Mad Cool, Bilbao BBK Live or the International Festival of Benicassim.

From Topfestivales we recommend you some songs that have become a symbol of this generation for their funny and provocative lyrics. Cayetano, El Himno Titular, La Planta que muere en la esquina, Espacio Vacío or Las Canciones de Juanita are some of them, you won't be able to stop listening to them!

You can tell us in comments which song you liked the most of this current famous rock singer artist.

If you've noticed, the artists we've talked about above are known for their musical contribution to their bands. For this reason, we also wanted to review some of the most popular current rock bands. Do you want to discover them?

The Black Angels is a rock band formed in 2004 in Austin, Texas, whose songs play with the hard sounds of garage rock, indie rock or psychedelic rock. Being included in a compilation of psychedelic bands, is what helped this band to get more popularity in the underground scene.

Stephanie Bailey, Christian Bland, Kyle Hunt, Alex Maas and Nate Ryan are its current members, although previously, Nate Ryan, Jennifer Raines and Todd Keller, were also part of the group. Black Grease is one of their best-known and most listened to songs, which is part of the soundtrack of Rockstar Games' Grand Theft Auto V video game.

This group has also been one of those who have participated in past editions of one of the most famous festivals worldwide: the Lollapalooza.

Young Men Dead, Entrance Song, Black Grease, Bad Vibrations or The First Vietnamese War, are some of the most listened songs of this current rock band in platforms like Spotify.

Surely many of you know this band, don't you? Coldplay is a British alternative rock or pop-rock band that was formed in 1996 by Chris Martin, Jon Buckland, Guy Berryman and Will Champion. A group that could not miss in this list, as it is considered one of the most relevant of the 2000s.

This band, in its beginnings, was compared to others like Radiohead or U2, and managed to achieve international success thanks to the release of their single Yellow. In addition, the subsequent release of their debut album Parachutes in 2002, made them reach the Mercury Awards.

And do you know how many sales this group has nowadays? Coldplay has already sold more than 100 million copies throughout their career! No doubt that says a lot about the great popularity of this band.

My Universe, Yellow, Fix You, The Scientist, Something Just Like This, Let Somebody Go, Don't Panic or We Never Change, are some of the most listened Coldplay songs on platforms like Spotify. Did you already know any of them?