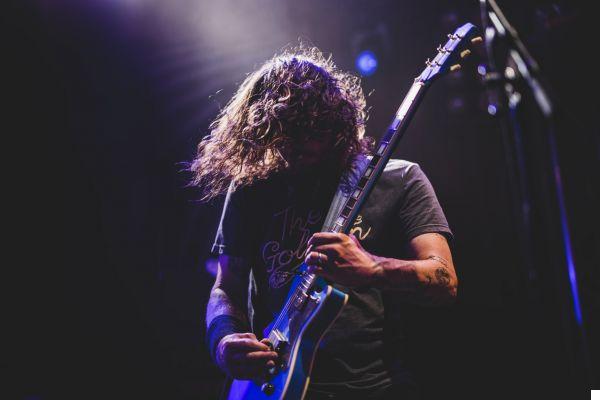 Are you a rock lover? If your answer is yes, this is your site!

Today, from Topfestivalswe travel to the other side of the pond, specifically to the United States, to meet some of the artists who have left their mark or are still making their way in the world of rock.

So, do you dare to know who are these famous famous American rock singers?

Although the genre of rock was born in the 1950s, this style did not reach its success until the 1970s, when it presented new, louder, more extreme and challenging forms.

This artist began his career in the world of music very young, with only 13 years old and was one of the creators of the rockabilly, a style that fuses country music with blues. blues. Years later he managed to sign a contract with RCA Records, and in 1956 he published his first single "Heartbreak Hotel", which became number one in the United States.

Little by little, from that moment on, he became one of the main figures of the popular rock and roll sound, until he became the best-selling soloist in the history of popular music.

Thomas Earl, known by the stage name Tom Pettyis another one of the best famous American rock singers. He was an American singer, musician and songwriter known for his career in the group Tom Petty and the Heartbreakers, an American group of rock band. In addition, he was also co-founder of the group The Traveling Wilburys in the late 1980s.

This artist, throughout his professional career, has managed to sell more than eighty million records worldwide, making him one of the best-selling musical artists. In 2002 he was inducted into the Rock and Roll Hall of Fame and Rolling Stone magazine named him as the 91st artist of the 100 greatest of all time.

Free Fallin', American Girl, Listen to her heart, Even the losers, Change of heart, It's good to be king or Something good coming, are some of his best known songs.Are some of the best known songs of this American rock singer. Did you know any of them? You can tell us in comments ;)

This singer has been a very influential figure in the culture of the rock culture since the 80's, which reached its commercial success with the work "Walk on the Wild Side", released in 1972. A song that achieved great success because it tried to give visibility to prostitution and transsexuality, a topic that rock music had not addressed to date.

We can highlight rock styles such as art rock, glam rock art rock, glam rock, proto-punk, experimental rock o noise rock in most of his songs. Some of the best known of this American rock singer are: Walk on The Wild Side, Perfect Day, Satellite of Love, Vicious or Coney Island Baby., among many others.

Did you know any of them?

His dynamic music laid the foundations of Rock & Roll, but not only that, as his music also helped to consolidate other musical genres such as the soulblues and funk. In addition, he has also been inducted into the Rock and Roll Hall of Fame.

He is also considered "The Preacher King of Rock & Roll, Rhythm & Blues and Soul", since in his first songs in the 50's, you could highlight a clear influence of blues and rhythm and blues.

Songs like Tutti Frutti, Long Tall Sally, Good Golly Miss Molly, Lucille or Rip It Upare some of the most listened songs of this great American rock artist, had you ever heard any of them?

Patricia Lee, known artistically as Patti Smith, is an American singer and songwriter, specifically from Chicago. This singer, nicknamed as The Godmother of Punk, is one of the most influential artists in music . rock.

Patti rose to fame with her debut album Horses in 1975, coinciding with the American punk movement. With her music she also took the opportunity to give a feminist and intellectual touch to this genre. In addition, in 2007 she was inducted into the Rock Hall of Fame. It should be noted that the artist is also a writer and, in 2010, she won the National Book Award for her memoir Just Kids.

This is another one of the famous American rock singers that cannot be missing in a list like this one. He is the lead singer of the famous American band Bon Jovi. and with his spectacular voice he has filled entire stadiums. Since 2009 Jon is part of the "Songwriters Hall of Fame". In addition, he was ranked number 50 on Billboard's "Power 100". This list honors the most influential people in the music business.

Although the years go by, his voice is still a worldwide a world reference in rock music at an international level.. He not only sings, but also composes and produces music. And, as a curious fact, he is a very sensitive person to the needs of others, since in 2006 he founded "The Jon Bon Jovi Soul Foundation", an organization to help poor and homeless people.

Listen to the video above, so that you can feel the music bursting through your body with one of rock's most epic songs, "It's My Life," which was written by Jon Bon Jovi, Max Martin, Richie Sambora.

In the song "Light My Fire" in the video above we can hear the very impressive voice that Morrison had, a deep, deep, deep color and very tight to the 60's and 70's. His live vocal technique is impressive, so talent and perfection were not lacking. In fact, many of his songs with "The Doors" reached the top in his time. Do you still listen to his music?

If you like rock with touches of blues and psychedelic rock, Janis Joplin should be your number 1 artist. She is a rock singer who released 3 successful albums while she was still alive and kicking.. After her death (at the age of 27) the record company released a fourth Janis Joplin fourth Janis album, which was actually still raw, but the people's receptivity was epic.

Her fourth album was titled "Pearl" and reached the number on the Billboard Billboard and today fans continue to listen to his songs on the Internet or through the radio. It's not just the tracks from the latest album that are played, of course. And, as a curious fact, Janis Joplin was one of the performers at the Monterey Pop Festival, where she sang with Big Brother and The Holding Company.

A rock and grunge performer quite controversial because of his regrettable heroin addiction, but one of the best singers in rock history. Kurt Cobain was the guitarist and lead vocalist of the grunge and rock band Nirvana. His voice has yet to be matched, as it was natural the way he did the grunge or "raspy voice" effect.

At "Smells Like Teen Spirit" we can hear her excellent voice and how expressive she was. It seems to tell you something just with the peculiar timbre and color of her voice. Some of the bands that influenced him were Blue Cheer, The Vaselines, Meat Puppets, Pixies and The Melvins.. Curiously, he himself says that he was inspired by Pixies when in the band Nirvana he composed "Smells Like Teen Spirit".

This American singer, pianist and composer surprises us all with his mythical voice. He was none other than one of the founders of Guns N' Roses along with guitarist Izzy Stradlin. He is still active with the band after their reunion in 2016, so you still have the chance to see him perform live.

Without a doubt, Axl Rose is one of the best famous American rock singers. Some of Axl's most famous songs with Guns N' Roses are. "November Rain", "Don't Cry" and "Sweet Child O' Mine". Nowadays, he is 60 years old, but it seems that his voice doesn't suffer any change. Do you want to go to an Axl Rose concert with this band?

With these rock singers and bands you can feel a little nostalgic, especially for those artists who have already departed to eternity. We've included them in this list because they deserve it and as a tribute to their hard work. Anyway, we hope you jump and vibrate with emotion with some of the videos we leave you in the reviews.