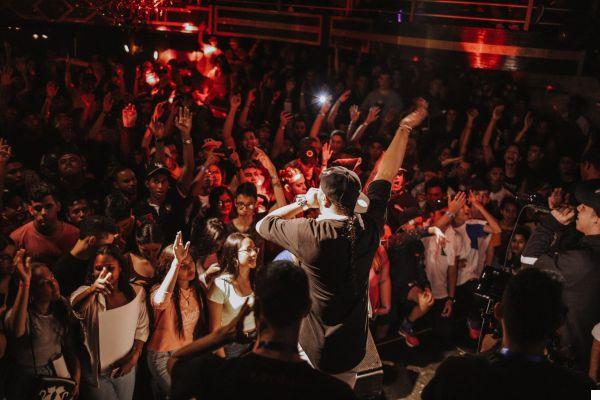 Are you a lover of the urban genre? Stay, because today, in Topfestivales, we bring you something that will help you to enrich yourself with the best music of the trap genre, and we bring you a selection where you will meet some of the best Latin trap singers. Will any of them be among your favorites?

Best Latin trap singers that can not miss in your playlist

If you like the urban genre, specifically the trap style, be very attentive because today we cross the pond nothing more and nothing less than tomove to Latin America .

This continent has seen the emergence of many of the great artists of trap, because did you know that this subgenre has its roots in Puerto Rico?

Get ready, because below we reveal the Latin trap singers you can't miss on your playlist. Let's get started!

Emmanuel Gazmey, known artistically as Anuel, is a Puerto Rican rapper and singer of Latin trap, although we can also frame some of his songs within the genre of Latin rap. reggaeton. This artist began recording his songs in 2010 with the singer Casper Mágico, but he was arrested for drug trafficking and then Anuel decided to start his solo career with his first hit "La Ocasión".


In addition, this great Latin trap artist has been partnered with another of the trap stars we'll talk about later, Karol G, with whom he has released songs that have gotten millions of plays around the world such as Secreto, Culpables or Dices Que Te Vas.

His famous phrase "Real hasta la muerte" echoes all over the planet, as this singer has achieved great international success with songs like China, Hasta Que Dios Haga, Hipócrita, Jangueo, Secreto or Ley Seca, among many others.

Here is one of his latest hits, accompanied by Jhay Cortez, what do you think?

Ozuna, also born in Puerto Rico, is a singer and songwriter who started writing his own songs at the age of 12. The high-pitched voice of this artist is very characteristic in his songs, which we can frame within the genres of Latin trap, rap or reggaeton.

Ozuna began his musical career in 2012 with the release of his first song "Imaginando", and in 2014 he signed a contract with Golden Family Records, which managed to consolidate his career.

But he truly leaps to fame, achieving international recognition, in 2016, when he collaborates in the single "La Ocasión" with De La Guetto, Arcángel and Anuel. Also that same year, his singles Si Tu Marido No Te Quiere and En La Intimidad, also managed to be among the 30 most popular songs on the Hot Latin Songs chart.

Songs like Una Locura, Del Mar, Diles, Taki Taki, Devuelveme, Ibiza, Se Preparó or Síguelo Bailando, are some of the most listened songs of this artist.


Ozuna, from the beginning of his career until today, has managed to sell more than 15 million copies, which makes him one of the best Latin artists and one of the most listened to Latin trap singers.

Bryant Myers is a singer of the urban genre, specifically Latin trap and reggaeton styles, who was born in Puerto Rico. This artist is considered one of the early pioneers of the Latin trap genre movement, as he was one of the first to start writing songs of this musical sub-genre.

Bryant Myers rose to fame in 2016, with the publication of his song"Esclava", of which a few months later makes a remix with Anuel and Almighty, which reached over 20 million plays before the end of the year.

Tracks like Hasta Abajo, Air Drop, Triste, Un Ratito Mas, Caile, Ganas Sobran or Ponle Música are some of the most popular and listened to of this artist. Is Bryant Myers among your favorite Latin trap singers?

Carolina Giraldo, known artistically as Karol G, is a Colombian singer and songwriter who frames her songs within the genres of Latin trap and reggaeton.

She began her musical career in 2012, although she became better known in 2013 with the release of the single "Amor de Dos" alongside Nicky Jam. Finally in 2016 she managed to sign a contract with the record label Universal Music Latin Entertainment, which strengthened her professional career as an artist.

But undoubtedly, it was in 2017 when he got that great international popularity, thanks to the single "Ahora Me Llama" with Bad Bunny. This single became a hit, and managed to position the singer in her first top 10 on Billboard's Hot Latin Songs chart.

Tusa, EL MAKINON, SEJODIOTO, Ocean, Dices Que Te Vas, Mi Cama, Culpables or Dont Be Shy (her latest single) are some of the most listened songs of this great artist. Is Karol G among your favorites?

I'm sure you know this one! Bad Bunny is a Puerto Rican rapper and composer who has a deep and raspy voice very characteristic. His music, mainly, we can frame it within the genres of Latin trap and reggaeton, although we can also appreciate others like rock, kizomba and soul.

His first single "Soy Peor" released in 2016 achieved great success, but he truly rose to fame and began to be recognized internationally after his collaboration with artists Cardi B and Drake in the singles I Like It and Mia.

During 2020, Bad Bunny released his second album YHLQMDLG, a surprise compilation album Las que no iban a salir, and his third studio album El Último Tour Del Mundo, which contained the single Dákiti which was number one on the Billboard Global 200 chart. In addition this same year he became the most played Latin artist on Spotify.

Tracks like Yonaguni, Volando, Volví, La Noche de Anoche, Dákiti, La Difícil, Yo Perreo Sola or Vete, are some of the best known of Bad Bunny, one of the kings of trap.

Mauro Ezequiel Lombardo, known artistically as Duki, is an Argentine singer, rapper and composer, specifically from Almagro. This artist began to gain recognition in the music world after his participation in the rap battles of the El Quinto Escalóncompetition, one of the best known in Argentina.

Although Latin trap is one of the genres by which most of the songs of this artist pull, we can also appreciate other styles such as rap, hip hop, reggaeton or dancehall.

In 2017 he signed a contract with the record label Mueva Records, and was able to release his first single "She Don't Give A FO", which currently remains one of the best known of this singer. In addition, he has headlined the "Buenos Aires Trap" festival for three consecutive years, and has been nominated, up to four times, for the Gardel Awards for his songs Si Te Sentis Sola, Sin Culpa and Tumbando el Club.

Some of his best known and most listened to songs are No Me Conocen, Como Si No Importara, 2:50, YaMeFui, Unfollow, Goteo or Sol y Luna among many others.