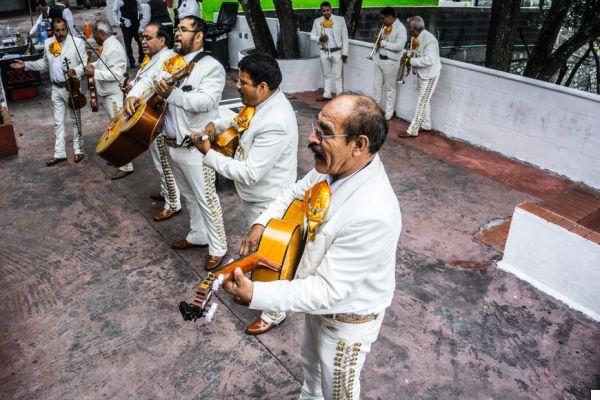 Would you like to get to know popular music from other cultures? Mexico is a Latin American country that has a great variety of musical artists. The music of this country is very outstanding, as it fuses traditional music with other genres creating a sound of its own.

That's why, from Topfestivales, we thought it would be interesting to bring you a selection of some of the best singers of Mexican popular music. Do you want to know them?

Today, from Topfestivales, we travel to Latin America, specifically to Mexico to meet some of the singers of Mexican popular music. You know the name by which these singers are known, don't you? Exactly, Mariachis .


In addition, Mexico is a country with a wide cultural offerand has seen the birth of many artists who have managed to internationalize the rhythms of their popular music. So, are you ready to find out who they are? Well, get ready, it's starting now!

Pedro Infante was a Mexican singer and actor who has been considered one of the best Mexican singers in history. As an actor his success was also undoubted, as he participated in more than 60 movies. As for his musical career, his songs are in the ranchera genre, of which he recorded more than 314.

It is worth mentioning that this artist began in the world of music in Culiacán, as a vocalist in several orchestras, and it was not until 1943 when he made his first musical recording, El soldado raso, for the Peerless Records label. In the films in which he has participated we can also highlight the ranchera genre for which this artist was so famous.

Jorge Negrete, like Pedro Infante, is another of the most famous Mexican popular music singers. He was also a Mexican singer and actor, who was also known by the nickname"El Charro Cantor". It is also important to note that this singer founded the Sindicato de Trabajadores de la Producción Cinematográfica de la República Mexicana.

His musical legacy revolves around a more classical musical genre, such as opera, although always making that fusion with the typical rhythms of Mexican popular music. This love for opera took him to the United States, where he was in the operas of different American theaters, where he began to achieve fame.

We couldn't leave out Luis Miguel, one of the best Mexican singers of all time. Luis Miguel is a singer and composer who, despite being born in Puerto Rico, has developed his entire musical career in Mexico.

The musical production of this artist is very complete and varied, as it is not closed to a particular genre and thanks to that we can find songs of various styles such as funk, ballads, jazz, boleros or mariachi, among others. Undoubtedly a great musical bet.

In addition, it should be noted that this artist managed to be recognized as the Latin artist who has sold more records during the 90s, and currently has sold more than 100 million albums worldwide. Many people also know him as "El Sol de Mexico".

Songs like La Bikina, La Media Vuelta, Ahora te puedes marchar, Si nos dejan, Será que no me amas, Sabes una cosa or No se tú, are some of the most popular songs of this Mexican popular music singer.

Yuridia Valenzuela, artistically known as Yuri, is one of the most recognized female voices among Mexico's most popular singers. This artist is not only known for her career as a singer, but also for her profession as an actress and television host.

Yuri has an extraordinary voice that stands out for its great quality and versatility, as she is able to interpret differentmusical genres such as pop, ballad, dance, ranchera, cumbia and other Mexican rhythms.

She began to achieve success in 1980 after the recording of her second album, and two years later, in 1982, she won the gold record award in America thanks to her album Llena de dulzura. From that moment on, her fame only grew, until she was recognized as one of the most listened to Latin artists.

Ya no vives en mí, Maldita primavera, Una mentira más, Yo te pido amor, Detrás de Mi Ventana, Este amor ya no se toca or El apagón are some of the best known songs of this popular Mexican singer.

Alberto Aguilera, known as Juan Gabriel, was another one of the best Mexican popular music singers. He was a singer, songwriter, composer and music producer from Paracuaro, Mexico. This artist is an important figure for popular music for his great contribution ingenres such as ballad, ranchera, bolero, rumba flamenca, salsa, cumbia, tango or samba, among many others, since his musical proposal is very complete and varied.

In addition, he is one of the most famous Latin American artists in history, and has been recognized as the most important Mexican singer of 20th century music, with more than 100 million records sold worldwide. Brutal, isn't it?

Hasta que te conocí, Abrázame Muy Fuerte, Amor eterno, Perdona Si Te Hago Llorar, Caray, Querida or Si Quieres, are some of the most popular songs of this great artist and singer of Mexican popular music. Did you know him?

Natalia Lafourcade is a Mexican singer, producer and composer of alternative genres or typical Latin American music such as merengue, bachata or salsa, among others.

Natalia began to gain success in the 2000's, when she released her first singles or had appearances in films such as Amar te duele. Today this great artist has ten studio albums, eight of them as a solo artist. Hasta La Raíz, Lo que construimos, Tú sí sabes quererme, La Fugitiva or Para Que Sufrir, are some of her best known songs.

Do you think Natalia Lafourcade is one of the best Mexican singers? You can tell us in comments ;)