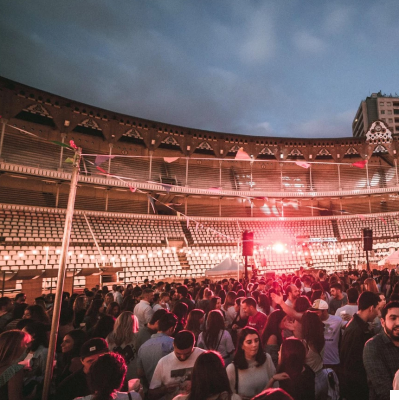 As every year, the Monumental Club takes place in the old Monumental bullring in Barcelona. Although this edition of Monumental Club will be held in one day, this time the festival will have a double session.

In the morning, the festival will be focused on families, with Monumental Kids. There will be activities, workshops and proposals for all audiences. Among the proposals are the "koinobori" flag making workshop and a postcard workshop.

There will also be a space for creation, as well as one for free movement and one for discovery. As if that were not enough, you can also find clowns and makeup artists for the little ones to paint their faces.

Monumental Kids will last until 4 pm.

In addition, there will be food trucks with top quality food all over the festival grounds.

The artists who have not wanted to miss this event are:

Where is Monumental Club 2022 being held?

The old Barcelona bullring"La Monumental" is in charge of hosting the festival and giving it its name. It was inaugurated in 1914 but did not receive the name Monumental until its enlargement and reopening in 1916.

It stopped hosting bullfights in 2010, when the Parliament of Catalonia voted in favor of the abolition of bullfighting. Despite the fact that it was created to hold bullfights, the square has been hosting concerts since the 1960s.

Today the square is used only for concerts, sporting events, circus and other events.

If you do not live in the city of Barcelona it can be a good opportunity to visit it. Besides, La Monumental is located very close to the center. Therefore, there are many hotels nearby. We suggest you some hotels where you can stay:

Within the festival grounds there is a wide range of food trucks where you can enjoy quality food. However, if you need suggestions outside the bullring, we recommend some restaurants:

How to get to Monumental Club 2022

If you want to go to Barcelona to enjoy Monumental Club 2022, you are in luck because it is a very well connected city. Some of the options to get there are:

There are different types of tickets. It depends on where you buy them and for which session you want them.