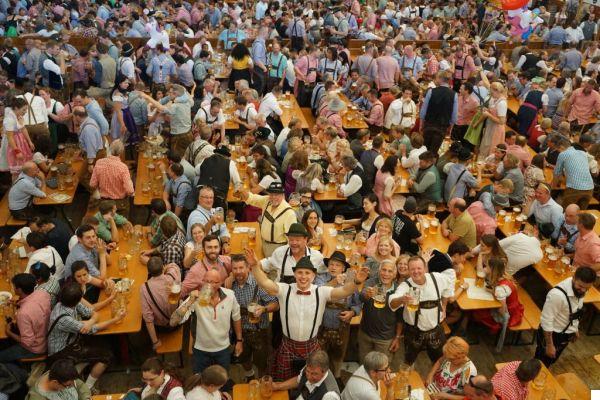 Where: Munich, Germany When: 17 September - 3 October 2021Genres: All kinds of music, rock, pop, folk, and of course traditional German music.

Today in Topfestivals we discover you one of the most famous festivals in Germany. The Oktoberfest is a festival that revolves around a different theme: beer. This event takes place annually in the city of Munich, Germany, and usually lasts about 15 days.


Oktoberfest is one of the most popular festivals in Germany and the world. It attracts millions of people from all over the world and is imitated in many other destinations such as Argentina, Venezuela or Brazil.

And if you don't like beer, don't worry, because Oktoberfest also has numerous stages where you can listen to everything from folk music to the best pop music of the moment. There is also a fairground with fairground rides and a parade of traditional costumes.


Oktoberfest 2021 opened on September 17, with the restrictions in force due to the pandemic, and is scheduled to continue to be held until October 3.

As we have told you before, Oktoberfest has a different theme to many other festivals: beer. That's why the program is somewhat alternative, and today in Topfestivales we tell you some of the events that take place in this edition:

These are just some of the hundreds of events that take place at Oktoberfest!

Where does Oktoberfest 2021 take place?

Oktoberfest, like the rest of the years, is celebrated in the Theresienwiese area, located in the center of the German city of Munich.

In order to stay near Oktoberfest, in Topfestivales we provide you with the name of some of the closest hotels to the festival:

And if you want to recharge your batteries or "down the beer" we also recommend some of the restaurants close to the event:

How to get to Oktoberfest 2021

Oktoberfest is celebrated in the city of Munich, Germany, specifically in the Theresienwiese area. This area is one of the most central of the city, and it has a wonderful subway service so you won't have any problem.

The event started last September 17th, but even so, from Topfestivales we have something important to tell you, you can take your flight and go right now to the Oktoberfest! The entrance to this event is totally free.