Riverland Festival is an independent music festival that held its first edition in 2019 and is based in Arriondas, the Asturian village that saw the birth of the descent of the Sella, which is located in Cangas de Onis. In this festival you can enjoy the best music within the genres of indie, pop or rock, through others such as urban and all framed in a place with a unique nature on the banks of the most emblematic river of Asturias, the Sella.


This festival only has one edition behind it because the editions planned for 2020 and 2021 had to be cancelled due to the conditions of the pandemic. Even so, its first edition was well received as it managed to gather more than 20,000 attendees and also had a Ferris wheel and a hot air balloon as ambience.

C. Tangana, Natos y Waor, Beret, Rulo y la contrabanda, Bad Gyal, Arnau Griso, Juancho Marqués, Fernando Costa, Kaydy Cain, Ayax y Prok, Rels B or Zombie Kids, are some of the artists who made enjoy with their music in the first edition, held as we have indicated above in 2019.

The organization of the festival, through its social networks, has already made a first advance of what will be the line-up for Riverland 2022. From Topfestivales we tell you some of those who will be in this edition, although there are still many to be confirmed:

And some more that we leave you here, in the poster itself, although we insist that there are many more to be confirmed: 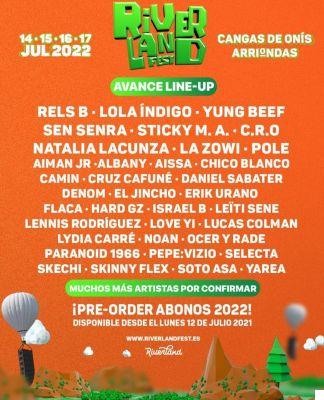 Where is Riverland Festival 2022?

The Riverland Festival, as we have said before, is held in the municipality of Arriondas, located in the town of Cangas de Onis, Asturias. A place that is popularly known for hosting the annual descent of the Sella, and what gives this festival a location, in terms of nature, perfect.

So that you can stay near the enclosure without having to go far away from the festival, from Topfestivales we bring you a selection of the closest hotels:

In addition, you can find cheaper options among the apartments offered by Airbnb on its website.

And if you want to recharge your batteries while you enjoy a good meal, in Topfestivales we think of everything, so we bring you some of the closest restaurants:

How to get to Riverland Festival

To get to the festival site, from Topfestivales we suggest you the following options:

Tickets for Riverland Festival 2022 are now available for sale. Tickets and passes from: