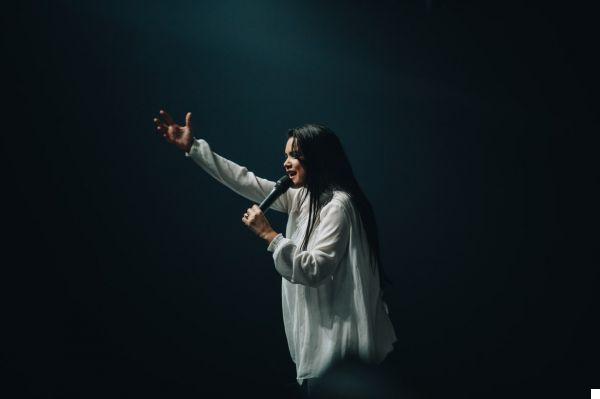 Do you like the rhythms of bachata? Surely many times you've heard songs of this Latin American genre and you couldn't help but stay still. From Topfestivales, we do not forget any musical genre, and today we have decided to bring you a selection of some women bachata singers. Do you know any of them?

6 women bachata singers that you should know

Bachata is a musical genre that includes many of the characteristic rhythms of Latin America since it has its origins in the Dominican Republic. This style is very danceable and you won't be able to leave your feet still for a second. Do you want to know more about this genre? Today, from Topfestivals, we tell you who are some of the best female bachata singers. Let's get started!

Alexandra Cabrera de la Cruz, was the female singer of the famous duo Monchy y Alexandra. This artist is from the Dominican Republic and is also considered "La Reina de la Bachata".

Their first release was the single Hoja en Blanco, in 1999, one of bachata's international hits, although without a doubt the song that launched them to international success was Dos Locos, in 2003. Most of their songs have a love theme, and are quite similar to romantic ballads.

It is worth noting that although this singer is the most popular bachatera, most of her repertoire is duets with the male lead of the duo, Monchy. Finally, in 2008 the duo separates, although in 2019 they are invited by Romeo Santos to record the song Años Luz, where different exponents of traditional Dominican bachata also participate.

Leslie Grace is an American singer and songwriter, although she is of Dominican descent. In the songs of this artist we can appreciate touches of genres such as Latin pop, bachata, R&B or reggaeton.

Her professional career began in 2011, when she was only 16 years old. She released her first single that same year, a cover of Will You Still Love Me Tomorrow in bachata version, which reached number one in many charts. Thus this artist managed to become the youngest female artist to do so.


From that moment her success only grows and crosses borders and in 2013, she was nominated in the 14th edition of the Latin Grammy Awards (not counting the rest of the awards to which she has been nominated).

Díganle, Duro y Suave, Bachatica, Be My Baby, Cómo Duele El Silencio, Qué Será or Nada de Amor, are some of the songs of this female bachata singer artist. Did you know any of her songs?

If you like bachata, we are sure that you will also be interested in knowing the female salsa singers the most outstanding ones.

Melida Rodriguez was a Dominican singer and specifically, the first woman to record bachata. She is undoubtedly one of the female precursors of the genre.

This artist was also a composer, as she wrote her own songs. Her best known work, "La sufrida", is the best known bachata sung by a female figure. This work, from a woman's perspective, tries to reflect that feminine freedom.

After 1967 the artist stopped composing and recording songs, but continued to perform from time to time until 1975 when she finally passed away.

Melida Rodriguez has gone down in history as one of the best female bachata singers. Do you think she deserves this position?

Aridia Ventura was a Dominican singer who began recording songs in 1975, when she was only 26 years old. We could also call this artist the successor of Melida Rodriguez in the bachata genre.

Ventura's songs and music were about life in the barrios and cabarets and she tried to reflect and give voice to the situations that women of the time had to live through. It is worth noting that although she also had bachata songs, this artist stood out, above all, for her rancheras.

In 1997, Ventura released another of her singles, Dinero, which achieved great success. In addition, songs like En la misma tumba, Déjame en paz, No Sufro Por Nadie, Tu volverás or Miel Amarga, are also some of the most listened to songs of this female bachata singer.

Vicky Corbacho is a Spanish artist and singer, specifically from Huelva, who has Latin influences. This artist began her career in the world of flamenco, although she was also passionate about Latin rhythms since she was very young and listened to artists like Juan Luis Guerra or Celia Cruz.

This artist, in 2017, released a version of the song"Que Bonito" by Rosario Flores, which achieved great success thanks to her spectacular voice. Songs like this have crossed borders and her success is already international. She also has a debut album, It's Vicky.

She is undoubtedly a great female bachata singer, as well as other Latin rhythms. Her success is imminent and many of her songs are being played on all the shows in Peru.

Have you ever heard of this artist before?

Rosalía is a Spanish singer and songwriter, specifically Catalan, who can be framed within the flamenco and urban music scene. So you might be thinking, what does this artist have to do with this selection?

Well, although most of her songs are framed within the styles of flamenco and urban, this artist has recently released a song that pulls for the Latin rhythms of bachata.

The artist has opted for bachata in her new song "La Fama", which has also collaborated with The Weeknd, who has also surprised singing in Spanish.

Although we're sure you already know her, we recommend you to listen to some of her songs like Con Altura, Yo x Ti Tu x Mi, Pienso En Tu Mirá, A Palé or Linda.