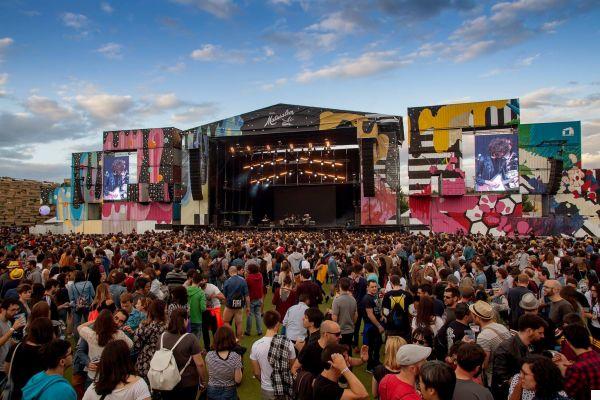 Mad Cool is a music festival of almost all genres(indie, rock, pop, electronic, hip hop...) that has been held in the community of Madrid since 2016. This festival not only gathers music of a wide variety of styles, but also fashion, art and gastronomy are linked to it.

Since its first edition in 2016, where it gathered more than 100,000 attendees, the festival has been gaining importance becoming one of the most important festivals on the national scene.


Artistssuch as Vetusta Morla, Green Day, The Lumineers, Artic Monkeys, La M.OD.A or Dua Lipa,among many others, are some of those who starred in past editions.

The Mad Cool edition scheduled for 2020could not beheld due to the pandemic conditions, and it is expected that the MadCool 2022 edition can take place without any impediment from July 6 to 9, 2022.

The organization of the festival has already announced the first names of the artists that will make up the Mad Cool 2022 edition. In TopFestivales we tell you the latest advances of theprogram of the next edition:

Among many others that have been announced and that you can see in the poster below: 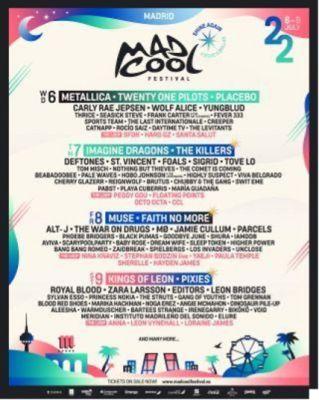 TheMad Cool festival is held at theMad Cool venue, which is located onAvenida de las Fuerzas Armadas in the cityof Madrid. A central area and easy to reach bypublic transport.

The festival, on its website reports theofficial hotels of the festival, which have discounts for attendees.From TopFestivales we leave them here, so you can take a look at them:

You can also find cheaper options among the apartments offered by Airbnb on its website.

We also recommend some of therestaurants closest to the festival,where you can recharge your batteries after a long day of music and entertainment:

How to get to Mad Cool

As mentioned above the festival is held in the city of Madrid, in the Mad Cool venue, which gives its name to it. To get to the festival grounds the organization usually put free shuttles for festival goers from the venue to central areas of the city. You can also take a taxi or uber near the venue and you can also use the suburban and regular lines of the city.

Tickets for the Mad Cool 2022 festivalare now available for sale on their website. Prices of passes and tickets from: