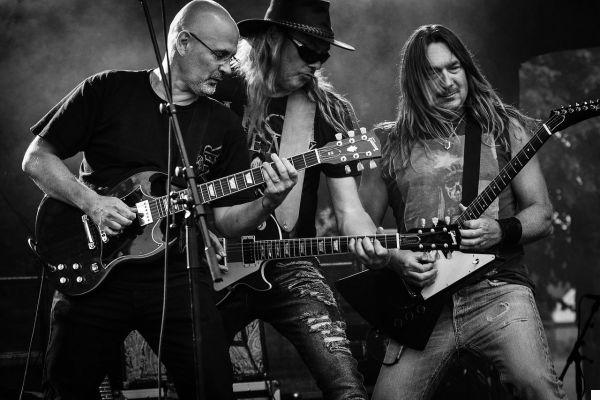 Electric discharges and batteries at a thousand per hour on gigantic stages, does this sound like something specific to you? TopFestivals will make you vibrate to your core with the best rock music festivals in the world. Don't miss these powerful events that have marked the history of music.

The 10 best rock music festivals in the world that you must know.

Rock is a musical genre that has many followers and we are part of them. Therefore, for all lovers of the genre we have prepared a selection of 10 international rock festivals. However, before we start keep in mind that the order of the list is based on the number of people attending these festivals.

Coachella Festival The festival is one of the best rock music festivals in the world and the bands that perform there have played in front of 250,000 people. The epicenter of this mega event is Indio, California, USA.


This is an event with a long trajectory, since its first edition was in 1999. We also mention that it is organized by Goldenvoice. As if that were not enough, some of the bands that have made the attendees jump and sing at the top of their lungs include The Cure, Radiohead and The Killers.

In the same way, have headed the posters of some of its editions famous groups such as Queen, Aerosmith, Héroes del Silencio, Metallica, Linkin ParkIron Maiden, Maná, Kiss as well as the singer Marilyn Manson.

Several editions of this festival have received the Arthur Award in the category "Best festival in the world".. Since 2003 this festival has lasted 4 days and has gathered 149,500 people. We also mention that the posters and other designs of Rock Werchter were made by Tom Hautekiet.

Donington Park, United Kingdom is the place where the Download Festival takes place under the organization of the production company Live Nation. It is one of the festivals that you should not miss and worth going to with friends or as a couple.

Glastonbury Festival The festival is one of the best rock music festivals in the world that could not miss in this top, since it not only puts the public to jump and sing, but also to enjoy dance performances, comedy, theater, cabaret and circus. Would you like to attend?

You should know that part of the money raised goes to support charitable causes and that, with the exception of security and technical staff, most of the people who work there are volunteers.

The Black Keys, Arctic Monkeys, Foo Fighters, Lucybell, Alabama Shakes, Portugal. The Man, The 1975 and The Strokes, have been just some of the rock bands that have been present at the festival. Lollapalooza.

Chicago is the city that since 2005 has witnessed the excitement, adrenaline and joy felt by the thousands of people who travel from other countries and cities to see their idols at this mega event.

Do you want to know who have performed at this festival? Well, on its stages have been Marilyn Manson, Green Day, Die ÄrzteLa Vela Puerca, The Sisters of Mercy, Placebo, The Killers, Evanescence, Kiss, among others.

It is considered to be one of the biggest festivals in Europe y its beginnings date back to 1992. Given the trajectory it has, it should be part of this list. There have been many bands and artists who have played at this festival.

In the same way, we mention that the public will not only enjoy exponents of the rock, but also other genres such as pop, reggae or electronica. Therefore, it attracts the attention of people of different ages and musical tastes, who come together to live a different experience.

Latin America has one of the international rock festivals, which takes place in Bogota, Colombia. With 25 editionsit is already an event with a lot of experience that is worth attending, in addition, the festival has a space called "Carpa Distrito Rock" (Rock District Tent) where various entrepreneurs present their services or products.

Also, Rock al Parque features both national and international bands. If you live in Latin Americadon't miss the experience of attending this festival.

Thanks to these festivals you will feel in person the power of distorted guitars and dark voices of international bands. However, this is not the end, but the beginning of many TopFestivals that will delight your ears.

add a comment of Best rock music festivals in the world