Mexican singers of the 80's 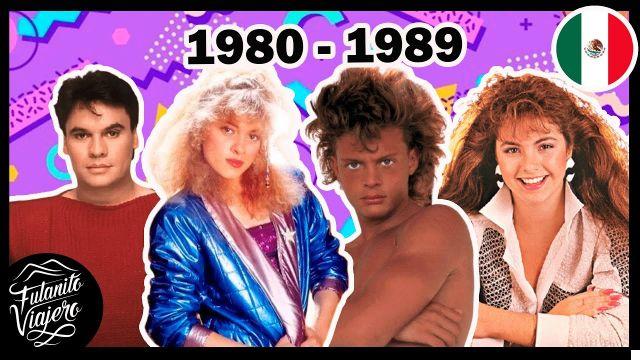 TopFestivals will make you travel to the Aztec country through the music of the 10 Mexican Mexican singers of the 80's. They transcended borders and delighted the world with their music. Unfortunately, some of them are no longer in this world, but they left a great legacy.

The 10 Mexican singers of the 80's you must listen to

Do you remember the song "Hasta que te conocí"? Well, in this top we bring for you Juan Gabriel and others Mexican singers of the 80's that you must listen to if you like Latin music.

Among the singers of the Mexican 80's is Thalia, who is not only dedicated to singing, she is also an actress and businesswoman. Her beginnings in music date back to 1980. As a child, she was the lead singer of the children's group Din-Din and in 1986 she was part of the group Timbiriche, with which she recorded 3 studio albums.

Later, she launched her solo career and among her musical hits we have: "Piel morena", "Amor a la mexicana", "Entre el mar y una estrella" and "Arrasando".

This band was founded in 1975 by Joel Solis and singer Marco Antonio Solis. The band's first musical hit was "Falso Amor" (False Love) and became quite popular in the United States and Latin America. Likewise, in only 1 year they managed to sell 1 million records, for which they obtained a "diamond disc". In the same way, we mention that the group won the "Billboard" award as "Best Billboard" award as "Best Latin Group" in 1982 and 1995. in 1982 and 1995.

Gloria de los Ángeles Treviño Ruiz is a Mexican singer, composer, businesswoman and actress born in Monterrey, Nuevo León. She began her artistic career in 1985, as a member of the group "El Grupo de la Música". "Boquitas Pintadas".. Later, she decided to start as a soloist with the release of her first album ...¿Qué hago aquí?

Also, in the 2000's she released 5 albums and toured internationally. Among her most outstanding works are: "Tu ángel de la guarda", "Una rosa blu" and "El amor".

This is one of the singers of the Mexican 80's considered as icons of music in the first half of the 20th century.. Due to his legacy and trajectory, he was nicknamed as "The prince of the song".. One of his most impressive interpretations was the song "El Triste"..

Likewise, you should know that during the 80's he was internationally recognized, even, he was number 1 in Mexico and the most talented Latin artist, as well as popular. Unfortunately, he is no longer with us.

Jesús Emmanuel Arturo Acha Martínez, better known as "Emmanuel"had a musical career of more than 40 years and his record sales exceeded 35 million albums. Likewise, his musical production includes more than 17 records and 18 albums. As if that were not enough, he is one of the Spanish-language artists who managed to conquer the U.S. market, performing in the most important stages and forums such as the "Radio City Music Hall" in New York. "Radio City Music Hall in New York..

Lucero Hogaza León, better known as "America's Sweetheart". or, simply, "Lucero", started in music when she was only 10 years old. At that time she was known as "Lucerito" and at the age of 13 she recorded her first album, "Te prometo". Her most popular song during the 80's was "Cuéntame". Likewise, other songs such as "Ya no" and "Electricidad" were number one in Mexico at the time.

As an important fact, we tell you that after several years of having separated from the band and starting his solo career, Saúl Hernández announced his return to the group in 2011. In fact, he reunited with the original members. It is worth mentioning that in the same year Saul participated in one of the most popular Latin American music festivals most popular in Latin America, "Vive Latino".

It was one of the most popular bands during the 80s and 90s. We have included it in the list because it was formed by children who today are great artists, Paulina Rubio, Edith Márquez and Thalía. Also, we inform you that after the departure of the above mentioned singers the band continued with other performers, among them, Sasha Sokol, Benny Ibarra, Diego Schoening, Mariana Garza, Erik Rubín and Alix Bauer.

Erick Ibarra Miramontes, known artistically as Alán Ibarrais one of the main singers of the 80's in Mexico. And he was not only very popular during this period, but also in the 90's. He sings in the boyband Magneto, by the way, one of the most famous hits of this group is "Vuela, vuela" (Fly, fly)We say this because maybe you have heard this song. Along with the band, Alán Ibarra toured the United States, Latin America and Spain.

Are you from Mexico or would you like to visit this beautiful country? Then, check out the concert dates of these singers, because some of them will be performing very soon in the Aztec country, take advantage and get to know Mexico! You will love the people and their culture.

add a comment of Mexican singers of the 80's