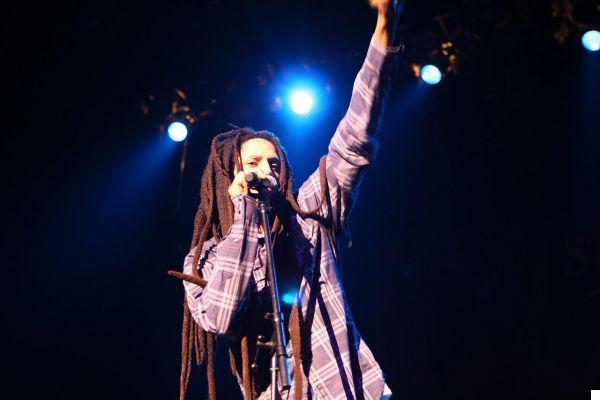 7 American reggae singers that you must listen to

Perhaps you know the music of one of the greatest exponents of reggae, Bob Marley. Well, although he is no longer in this world, his children have continued his legacy and inherited the talent of his father, this is the case of Stephen Marley one of the American reggae singers you should listen to along with the following list.

Also, you should know that Nash made it to #1 on the prestigious Billboard magazine with his track "Can See Clearly Now" in 1972. In addition, his musical repertoire includes several albums such as "I Can See Clearly Now", which includes 4 songs composed by Bob.

His stage name is the equivalent of the Hebrew name "Matthew", as he is of Jewish descent. Jewish ancestryIn fact, in the lyrics of his songs he incorporates spiritual elements. In addition, he is one of the American reggae singers who mixes his music with other genres such as ska and dub..

Likewise, his style is characterized by combining the influences of Rabbi Shlomo Carlebach with the typical sounds of Bob Marley. Matisyahu released his first album in 2004 titled "Shake Off the Dust.... Arise". This album was accepted by audiences of different ethnicities, religions and lifestyles. If that wasn't enough, his Live at Stubb's album allowed him to consolidate his musical career.

He is the son of the renowned reggae singer Jimmy Riley. Tarrus launched his musical career in 2004 with his debut album called "Challenges". Throughout his career he has received important awards some of them are: The Star People's Choice Awards, Reggae Academy, EME Awards and Youth View.

Likewise, some of his most successful songs are: "Good Girl Gone Bad", "Start Anew" and "Contagious". Likewise, due to his incredible performances he has received positive reviews from the media in the United States, the Caribbean and Europe.

On the other hand, we mention that Tarrus Riley has performed in the most important reggae festivals such as the 2010 Reggae Sumfest and the 2011 Roskilde.

The most successful song of Collie Buddz is "Mamacita", which was quite popular in South America, Puerto Rico, Latin America, The Antilles, Central America and part of the United States. This song belongs to her eponymous album which she released in 2007 and 2 years after its release she had over 2 million copies sold.

On the other hand, he has been on the stages of the most important music festivals, for example, Lollapalooza, Reggae on the Rocks, Manifestivus, Summer Jam, UCLA JazzReggae, California Roots Festival, among others. In addition, he launched his own record label "Harper Digital" and participated in the album "Intoxication" of singer Shaggy in "Mad Mad World".

He is the son of the legendary and maximum exponent of reggae Bob Marley. His beginnings in music were in the band Ziggy Marley & The Melody Makers, with his brothers Sharon, Cedella and Ziggy. In the 80's they won 3 Grammy awards and later in 2000 the group broke up.

Stephen also stands out as a music producer and has collaborated in all of his brother Damian's record productions, one of the most important albums, "Welcome to Jamrock". In addition, he participated in the songs "Hey Girl", "Still Searching", "Pimpa's Paradise", "All Night" and "For the Babies.".

As if that wasn't enough, he won a Grammy Award in the category "Best Reggae Album". in 2008 for "Mind Control", a track that includes collaborations with artists such as Damian Marley and Buju Banton.

Another of the best american reggae singers is Sean Kingston, who is of Jamaican descent and his musical style spans rap, reggae and pop genres. At just 17 years old, he released his first single, "Beautiful Girls," which is inspired by the song "Stand by Me" by singer Ben E. King.

Although Joseph Israel is no longer with us we consider including him in this top because he founded groups of reggae groups such as Kepha and Lions of Israel. Also, since he was a child he had contact with this musical genre, as both his uncle and his father were fans of this music and sometimes traveled to Jamaica.

Joseph on some occasions mentioned that the artists that inspired him were. Jimmy Cliff, Peter Tosh, Bob Marley and Burning Spear.. His song "Gone Are the Days" reached the eleventh place in the "Top Reggae" album charts.

Tell us, which singer from the list do you like the most? Were you able to connect with nature through this music? Leave us your opinion below, we love to read you.