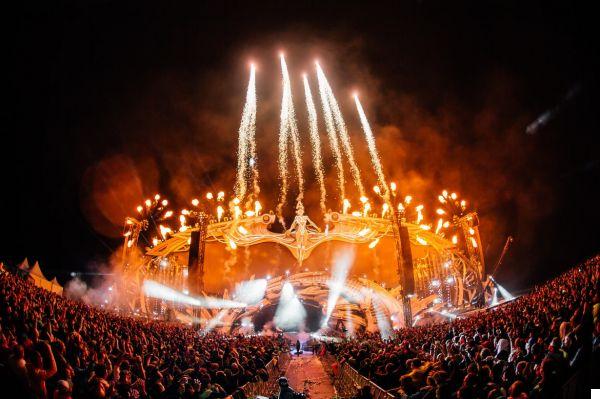 Have you ever traveled to Portugal? This country bordering Spain is a perfect destination for music lovers. Are you one of them? Well, you should know that this country hosts some of the best European events. That's why, from TopFestivalswe invite you to get to know some of the best music festivals in Portugal.Are you up for it?

Sea, beach, sun and music. Portugal is undoubtedly a perfect destination for music lovers. Don't worry if your favorite style is rockrock, pop pop or electronic electronic musicbecause this country will offer you a great musical diversity. Today, from Topfestivalswe invite you to know some of the best music festivals in Portugal that make this neighboring country of Spain more attractive. So what, do you dare to know them?

Afro Nation is a music festival held in Portimao, Portugal, since 2019, so it is a fairly young festival although it has been very well received among music lovers. Despite this, its editions planned for 2020 and 2021, had to be canceled due to pandemic conditions.

To give you an idea, artists like Wizkid, Davido and Burna Boy, IAMDDB, MIST, Yxng Bane, Stefflon Don, Ms Dynamite, and many more, have been on the bill. and many others have been present in past editions of the festival.


And on top of that you will be able to enjoy the shows of all the artists invited to the edition on the beach. Isn't it perfect?

The Rolling Loudmusic festival arrives for the first time in Europe this 2022, so it could not be missing in this list. This event is one of the world's hip hop biggest in the world, as it has established itself as one of the best known brands of rap music.

The line-up for this first edition in Portugal is not yet known, but just to give you an idea of what's in store, artists like Billie Eilish, Lewis Capaldi, Taylor Swift, Post Malone, Liam Gallagher, Stormzy, Travis Scott, Camila Cabello, Marshmello or Lana Del Rey, are some of the artists who have participated in the edition of the festival that takes place in the United Kingdom.

Undoubtedly, one of the best music festivals in Portugal.

EDC or Electric Daisy Carnival, is a dance music festival that will travel to Europe, specifically to Portimao, Portugal. PortimaoPortugal, to celebrate its 25th anniversary.

The festival will take place at the famous Praia da Rochaand will bring together the most prominent artists in the fields of music EDM, house, techno, drum and bass and many more, Are you an electronic music lover? If so, you can't miss it!

To give you an idea, Alesso, Armin Van Buuren, Tiësto, Eric Prydz, Diplo, DJ Snake or Marshmello, Chus & Ceballos, Fisher, Sonny Fodera or Gorgon Cityare some of the artists who have been present in other editions of the event.

Undoubtedly, in its lineup you will find the names of the best known and established artists of dance music, both mainstream stars and titans of the underground scene. Do not miss it!

NOS Alive is a music festival that has been held since 2007 on the banks of the Algés River, in the city of Algés . Oeiras, Portugal. Since 2009 it has taken place in July, as it was previously held in June.

And don't worry about your musical tastes, as it is a very varied and complete option. You will be able to enjoy genres such as rock, alternative, pop, electronica, stand-up comedy and many others.

Their shows are divided into different stages, which in past editions have been performed by artists such as The Cure, Vampire Weekend, The Smashing Pumpkins, Bon Iver, Thom Yorke, Grace Jones, Jorja Smith or The Chemical Brothers, among many others.

Are you really going to miss one of the best music festivals in Europe?

Neopop is an electronic music festival that has been held since 2006 in Viana de CasteloPortugal. Before 2006 the festival was also celebrated but under the name "Anti-pop".

Undoubtedly, this event is one of the best electronic music festivals in Portugal and one of the most popular. So what, are you up for it?

Little by little this festival has been gaining popularity even outside the borders of the country, as in its latest editions has come to gather more than 100,000 people from over 55 different nationalities. Thus becoming one of the best music festivals in Portugal.

Lana Del Rey, Tyler, The Creator, Beck, FKA Twigs, Chromatics, Pavement, King Krule, Mura Masa, Kim Gordon, Dinosaur Jr., Khruangbin, Maggie Rogers or Cigarettes After Sex, are some of the artists who have been on the stages of NOS Primavera Sound in past editions.

Do you want to join us?

It is a festival originally from Brazil that, given its great popularity, has been carried out in other countries. That's why Portugal was not left behind and the city of Lisbon since 2004 has been the European epicenter of this event.

The Bela Vista Park is the place where thousands of people gather to enjoy their favorite artists. On the stage of this festival have been presented Demi Lovato, Katy Perry, The Killers, Bruno Mars, The Black Eyed Peas, Avicii, Maroon 5, Ivete Sangalo, AC/DC, Ozzy Osbourne, Iron Maiden, among other artists and groups.among other artists and groups.

This festival bears the name of the beer brand that sponsors it "Super Bock and the organization is in charge of the company "Música no Coração".. Since its first editions it has been held in different places. It is currently held in Herdade do Cabeço da Flauta, Sesimbra.

Also, we mention that the musical genres covered by this event are: electronic, pop, hip hop, rock and , heavy metalhip hop, rock andalternative rock . Some of the artists who have been in the lineup of this festival are: Nelly Furtado, Black Eyed Peas, Coldplay, Linkin Park, Marilyn Manson, Metallica, Iron Maiden, Tiësto and Placebo.

MEO Sudoeste in its beginnings was a festival of rock, but over time it has added other genres, for example, in the editions from 2005 to 2013 it had a stage for reggae exponents. It has also included the electronic music and hip hop. Odemira, in the Southwest of Portugal is the stage that since 1997 has witnessed this event.

Do you want to know who has played at this festival? Well, internationally renowned artists and bands have made attendees vibrate, among them are: Manu Chao, David Guetta, Pitbull, Calvin Harris, Martin Garrix, Alesso, Marylin Manson and Sepultura..

The Spanish edition of the prestigious magazine Rolling Stone magazine named it in 2005 as one of the 5 "Best summer festivals in Europe".. In addition, this event is held in August in Praia do Taboão, Paredes de Coura and, to date, has 27 editions.

Also, you should know that its name changed due to the sponsor of the event, since it used to be called "Festival Paredes de Coura". If you decide to attend the event, you can enjoy different musical genres such as rock, pop, alternative rock and electronic music.

Undoubtedly, this is one of the best music festivals in Portugal and there have debuted artists and bands like. Franz Ferdinand, Pixies, The Kills, Alpha Blondy, Placebo and Coldplay..

Brisa Beach Party is an event organized by the radio station Nova Era and is focused exclusively on electronic music since 2007 in Praia do Aterro, Matosinhos, Porto. It is also one of the biggest beach parties in the world. The best DJs have lit up the party in each of its editions.

Do you like electronic music? Then this is the festival you should not miss. Some of the exponents who have played their mixes are: Tiësto, Avicii, Dimitri Vegas & Like Mike, Martin Garrix, Alesso, David Guetta and R3hab..

add a comment of Best music festivals in Portugal