Best Argentine singers of the moment 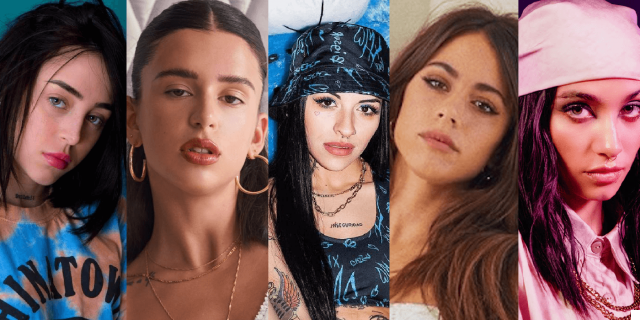 Do you like to know everything about the music scene outside the national scene? Today in Topfestivales we bring you the best Argentinian singers of the moment that you can't miss, some of them being the most listened to in the world.

Best Argentinian singers that you can not miss

If you are a fan of music without borders, today we bring you the best Argentinian singers of the moment and the most listened to by platforms like Spotiffy, so that none of them goes unnoticed.

We start with this young girl, Tini, only 24 years old, who lately is sweeping the streaming platforms with her new singles. You can't say that in the last few months you haven't heard songs like "Miénteme" with María Becerra or "La niña de la escuela" with Lola Índigo.


In addition, from TopFestivales we tell you a curiosity about this artist and is that she is also an actress, and has starred in series such as "Violetta" (broadcast on Disney Channel).

Her name is Natalia Peluso, although we all know her as Nathy Peluso. Although she was born in Argentina , most of her musical career has been developed in Spain, where in recent years she has become a reference in the urban and Latin trap genre.


She rose to fame when she released her first track in 2017 "Corashe". Although he has other tracks that almost everyone knows like "La Sandunguera" or "Delito".

Paulo Londra who, although he was born in Córdoba, started to gain recognition after his passage through one of the biggest freestyle competitions in Argentina and Latin America, "El Quinto Escalón".

In 2018 he managed to become the Argentine artist with the most plays on Spotify and Youtube with his single "Adan y Eva".

Mauro Ezequiel Quiroga, known artistically as Duki, is another of the best Argentine singers of the moment. He was born in Almagro in Buenos Aires. Duki is an Argentine singer and songwriter who, like Paulo Londra, began to be recognized after his performances in the rap battles of "El Quinto Escalón".

In 2019 he released his first album, but it was in 2021 when, with his second album "Desde el fin del mundo", he reached the first position in digital albums in Argentina.

Songs like "Goteo", nominated for the Latin Grammy Award 2020, or "Sin culpa" or "She don't give a fo", are the most listened songs of this artist.

Khea is an Argentine singer, songwriter and dancer who took his first steps in the music industry competing in freestyle battles. His genre ranges from trap, reggaeton, Latin pop and hip hop.

Songs like "Loca" or the collaboration with Duki in "She dont give a fo" are some of the most listened songs of this artist in platforms like Spotify.

Julieta Emilia Cazzucheli, or Cazzu, is an Argentine rapper and songwriter. In her beginnings she started with rock and cumbia, although her first release was within the Trap genre, with "Maldades" in 2017. But her real breakthrough came with the success of her collaboration with Khea and Duki on the track "Loca".

A curiosity about this Argentinian artist is that she is popularly known as "the queen of trap".

Gonzalo is his real name, although we all know him by the artistic name of "Bizarrap" and, without a doubt, he is another of the best Argentinian singers of the moment.

Argentine music producer and DJ who has specialized in genres such as trap, electronic music and hip hop. Well known for the Bzrp Music Sessions and for his track "Ya me fui" with Duki and Nicki Nicole.

Nicki Nicole is an Argentine singer and songwriter who managed to jump to fame in 2019 with her first single "Wapo treketero", achieving thousands of plays on YouTube .

She has been nominated for awards such as the MTV Music Awards, Latin Grammy Awards, the 40 Music Awards or Spotify Awards among others.

Abel Pintos, Argentine singer, songwriter and producer. Dedicated to folklore and Latin pop, he began his musical career when he was only 7 years old. He won the Carlos Gardel award for Best Folk Artist Album with "Quien pudiera".

His songs "Sin Principio ni Final", "Motivos" or "Oncemil", are also very listened to on Spotify.

Enanitos Verdes is an Argentine rock band formed in 1979 in Mendoza. This band has managed to reach the top of Argentine charts in America and the Caribbean. Composed by Marciano Cantero, Felipe Staiti and Jota Morelli.

As a curiosity we tell you that this group has made an extensive tour of the United States and Mexico, to present their latest album and as a celebration of their 30 years of musical career.

add a comment from Best Argentine singers of the moment