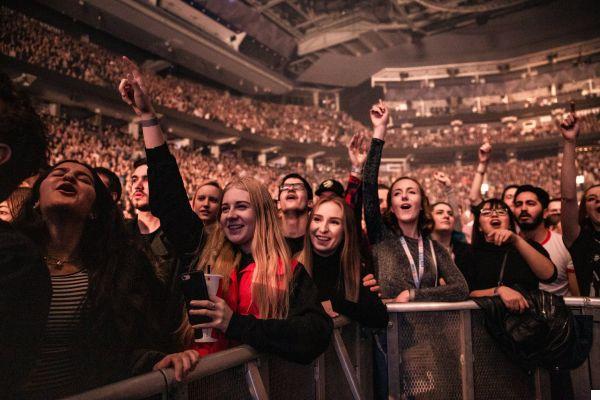 Do you like to travel and discover new festivals and new music? Today from Topfestivals we move to the birthplace of artists like the Beatles to make you a tour of the best festivals in England.

England is a country with a musical heritage of great importance. This country has been the country of origin of famous artists such as the Beatles, Paul McCartney or David Bowie, among many others.

Therefore, from Topfestivales we think it is essential that as good music lovers you know some of the best festivals in England. Stay tuned because... let's start!

The first edition of this festival was held fifty years ago, in 1971, and is located near Pilton, in Somerset, county of England. Glastonbury is a performing arts festival known internationally for its contemporary music, and for the presence of other arts such as dance, theatre, circus and cabaret, among others.

This festival has had in all its editions with the main pop/rock artists of the moment, but you can also listen to other genres such as reggae, electronic, folk, indie rock or punk rock. To give you an idea, artists like Pharrel Williams, Katy Perry, Bastille, Wolf Alice, Ellie Goulding, Alt-J or The Chemical Brothers, are some of those who performed in past editions.


If you want to know more information about the next edition of this festival, we tell you here.

The Latitude Festival is another of the best festivals in England. It is a festival that has been held since 2006 in Henham Park, near Southwold, England. The festival includes mainly indie and alternative music artists. In addition, the festival also includes other types of events such as art, comedy, dance or literature.


The festival has four stages, where artists such as The Vaccines, The Killers, Wolf Alice, Belle & Sebastian, Jessie Ware, La Femme or Isabelle Brown, among many others, have performed.

When you walk around the festival grounds you can find many surprises, such as films projected among the trees or a wellness sanctuary where you can relax or practice yoga.

The Green Man Festival is a festival of independent music, science and art. It is held annually in August since 2003. It is one of the most attended events in the country, with a capacity of 25,000 people. In it you can listen to genres such as indie, rock, folk, dance and American music.

As we said before, this festival not only hosts music in it, but also has other areas of literature, film, theater, comedy, science and wellness.

Artists like Stereolab, Amadou & Mariam, Julia Jacklin, Malena Zavala, Pig, Pozi or Durand Jones & The Indication, are some of those who have made up past editions of this festival.

The Edinburgh Jazz and Blues Festival is another of the best festivals in England. It was founded in 1978, and since then it has focused on the genre of jazz and blues. traditional jazz.

The festival brings together artists of great musical quality from all over the world. This event is not held in a specific venue, but the shows are spread across many areas of the city of Edinburgh.

This event has over a hundred concerts and is usually held just before the city's most famous festival, the Edinburgh International Festival. Artists such as Jools Holland, Dumpstaphunk and Sarah McKenzie were the highlights of the last edition.

Wireless Festival is a music festival held annually in London, owned by Live Nation. Although it began as a festival focused on the genres of rock and pop, during the last years hip hop, rap and in general all types of urban musicpredominate.

It is one of the largest festivals, having a capacity to accommodate 49,000 people, and has brought together internationally acclaimed artists such as Kanye West, Jhay-Z, Bruno Mars, Rihanna and Justin Timberlake among many others.

WOMAD stands for World of Music, Arts & Dance, and gives its name to a music festival that besides being held in the UK, is also celebrated in other countries such as Spain, Chile, United States, Australia, Italy and New Zealand.

This festival, not only has music in its programming, it is considered a cultural festival, as it includes other recreational activities such as crafts.

At this festival you can enjoy a wide variety of genres and popular and ethnic music. Artists such as Avantdale Bowling Club, Deva Mahal, Dick Frizzell MNZM, Fat Freddy's Drop, Dr. Siouxsie Wiles. or Shades of Shakti, are some of the many who have passed through the stages of the WOMAD festival.

All Points East is a music festival held annually in London's Victoria Park. This event, which has become one of the best festivals in London, has a varied line-up of artists from the genre of rock, indie or alternative music.

The festival, in 2019 won the award for Best Festival at the Music Week Awards, and that same year managed to gather around 40,000 attendees.

The Chemicals Brothers, Hot Chip, The Strokes, Christine and the Queens, Bon Iver or Bring Me The Horizont were some of the artists who headlined the last edition held in 2019.

Boundary Brighton is the most important electronic music festival in the city of Brighton, UK. This event is held every September in Stanmer Park, and has a line-up that brings together the best artists of the hause and bassgenre.

The concerts of the artists are distributed in the three stages of the festival, where artists such as Andy C, Wilkinson, Sub Focus, Shy FX or C-Cutzz & Kronichave performed.

Boundary Brighton will return with a new edition on 24 September 2022.