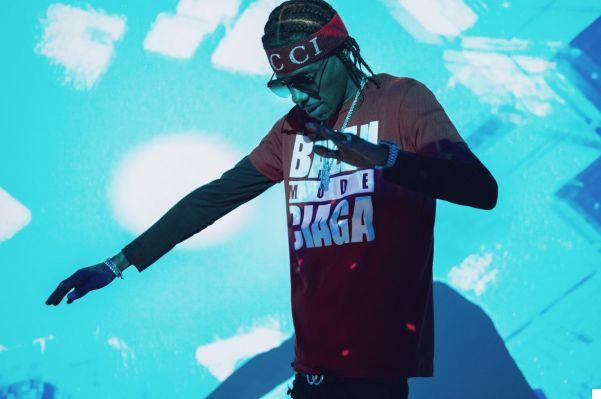 Are you a rap lover? You should know that Argentina is one of the countries that has experienced the most boom of urban music, specifically rap. It is true that this musical genre has had a great influence throughout Latin America but, from Topfestivales we wanted to focus on the impact in this country so you know some of the Argentine rap singers of the moment. Do you want to discover them?

Discover the current Argentine rap singers of the moment

If you're a true rap lover, buckle up and prepare your ears, because today we're going to take you on a long journey through the career of some of the best-known Argentine rap singers on theurban music scene.

Latin America has seen the birth of this genre in the 2010s, and with it the birth of many new Latin artists, particularly in Argentina. Do you want to know who they are? We tell you from Topfestivales.

Valentín Oliva, popularly and artistically known as WOS, is one of the best and most listened rap singers of the moment. He is an Argentine rapper and freestyler, specifically from Buenos Aires who began his musical career in rap battles between freestylers, and has been champion on several occasions of the famous Argentine competition El Quinto Escalón. In addition, he has also been champion of the FMS Argentina 2018 and the Red Bull Batalla de los Gallos 2018 international tournament.

His professional career in the world of music begins in 2018, with the release of the single Púrpura, in which a more aggressive rap can be highlighted, and in 2019 he releases his first studio album, Caravana. He has also been nominated for the Latin Grammy Awards for Best New Artist.


Some of the most listened songs of this great Latin rap singer are Melón Vino, Mira Mamá, Alma Dinamita, Culpa, Niño Gordo Flaco or Sangría, among others. We recommend you to listen to them, because this Argentine rap singer will leave you nothing to be desired.

Alejo Nahuel Acosta, known artistically as YSY A, is a singer and songwriter from Buenos Aires, Argentina. In his songs we can highlight the rhythms of urban styles such as rap and hip hop, and these have positioned him as one of the most influential rap singers in Argentina.

He is also known as "El Varón del Trap", since in his songs we can also highlight other urban styles such as trap or reggaeton. In addition, it should be noted that this artist was the creator of freestyle battles known as El Quinto Escalón.


It should be noted that in his songs we can enjoy the rhythms of tango, as this artist had strong influences from his uncle, who was a tango dancer, and his parents.

Matías Salvatierra, known as T&K as a rapper or as Tikranz in the freestyler battles era, is a rap singer who started to be known after his participation in 2011, in the Claypole Under competition, known as the Halabalusa.

In 2014 he released his first album as T&K, Writing Classics, which revolutionized the Argentine rap scene at the time, as it included a 90s sound inspired by Big L and Lewis Parker. In addition, he uses his music to portray the lives of the most humble.

C.R.E.M.A, Letra, Frío Espero, Latin Shit, El Libro Negro, Me Voy A Olvidar, Estelar or Tómalo o Déjalo, are some of the best known tracks of this Argentine rap singer.

Have you heard any of them before?

Bardero$ is another one of the best Argentine rap singers. It is an Argentinian duet formed by C.R.O and Homer El Mero Mero, who have revolutionized Latin rap with versatile tracks that besides rap include other styles such as boombap and trap.

This duet released their first album in 2013, Drug, and since then their success has only grown and crossed borders, reaching more than 2 million listeners on Spotify and 80 million plays on youtube. In addition, their songs have direct lyrics and a very authentic sound.

Without a doubt, these artists are two of the most nationally recognized Argentine rap singers .

Esperanza, 703, La Fiesta es de Nosotros, Unidad 9 or Llévame, are some of the most listened songs of these rappers on platforms like Spotify.

Mateo Palacios Corazzina, artistically known as Trueno, is an Argentine rapper and freestyler who has been active in the music world since 2014 and is mainly known for his freestyle session "Trueno: Bzrp Freestyle Sessions, Vol. 6".

He also gained a lot of fame after the release of the single Mamichula, in collaboration with Bizarrap and Nicky Nicole. This single in less than six months got over 200 million plays on youtube.

Before starting to record freestyle sessions in 2019, this artist participated in numerous freestyle battles and competitions such as A Cara de Perro Zoo Juniors and Red Bull Regional.

He has also participated with numerous artists such as Nicki Nicole, Underdann, Bizarrap, Halpe, XOVOX or C.Terrible among many others.

Salimo de Noche, Feel me??, Dance Crip, Mamichula or Panamá, are some of the most listened singles of this famous Argentine rap singer.

Federico Andrés Giannoni, known artistically as Emanero, is an Argentine rapper and composer who has become a reference in the rap genre in Latin America.

Although he began producing his own music in 2004, it was not until the end of 2005 that he released his first studio album Bienvenidos a Mi Mundo. His songs deal with social reality and personal problems and in them, in addition to rap, we can also highlight another urban style such as trap.

Chernobyl, El Juego, Sola, Como Vos Lo Hacés, Manicomio, Pastillitas, Según pasan los años or Veneno, are some of the most listened songs of this Argentine rap singer in platforms like Spotify.