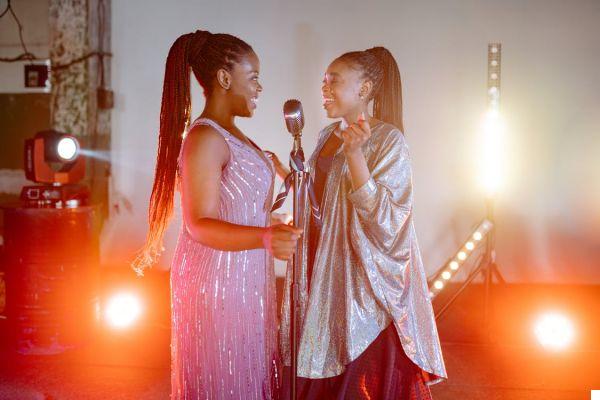 Women singers of the 80's that you should know.

The 80's era saw the birth of dance music, and along with it many artists, and many more genres that swept during this musical stage. Today from Topfestivals we will make a tour of all the women singers of the 80's era that have made history!

Whitney Houston, also known as "The Voice", was an American singer and producer, although she also worked as an actress and model. The genres she worked in were soul, blues and R&B, soul, blues and gospel. This artist has been one of the most awarded of all decades: 2 Emmy Awards, 6 Grammy Awards, 30 Billboard Music Awards and 22 Music Awards.

She rose to fame with her album Whitney Houston in 1985, which included singles such as "Whitney Houston" and "Whitney Houston". "Saving All My Love For You", "You Give Good Love" or "How Will I Know".. A few years later she appeared in films such as "The Bodyguard", in 1992, with the soundtrack of the movie "I Will Always Love You", which became the best-selling single.

Janet Jackson, born in Indiana, United States, and sister of Michael Jackson, the King of Pop. Although she first debuted as an actress in the television series she recorded with her brothers, "The Jacksons", years later she managed to position herself in the music world as a singer with the release of her album "Control"released in 1985.

This artist, throughout her professional career, has become a major hit in the music industry. R&B and pop icon. Other of her songs also include elements of funk, rap or industrial music. She has also been recognized as one of the best singers in the history of music.

Tracks such as "Together Again", "That's The Way Love Goes", "All For You". or "Got 'Till It's Gone" are some of Janet's most listened to on platforms like Spotify.

Ana Mae Bullock, known artistically as Tina Turneris an American singer, songwriter and actress, she is also considered to be the Queen of Rock. She retired from music in 2013 after a professional career of over fifty years.

Singles from her first solo album, Private Dancer, managed to achieve great success both nationally and internationally, and thus managed to consolidate her solo career, as years before she was part of bands like "Ike and Tina Turner". In addition, this great artist managed to sell more than two hundred million albums worldwide.

Gaynor Hopkins, known by her stage name Bonnie Tyler, is a British singer and songwriter. The rock,pop and country are the characteristic genres of her songs, sung in this singer's peculiar, slanted voice.

She began as a singer in a local, so it was not until 1977 when she rose to fame after releasing her album "The World Start Tonight" She has also been awarded and has been nominated for numerous awards that have recognized her great career in the world of music: three Goldene Europa Awards, an Echo Award, and nominated for three Brit Awards and three Grammy Awards.

Songs such as "Total Eclipse of the Heart," "Holding Out for a Hero"If You Were a Woman (And I Was a Man" or "Loving You's a Dirty Job", are some of the songs that have achieved international recognition and success.

Madonna is an American singer, songwriter and dancer, as well as being one of the great icons of international music. Her genres are pop and dancealthough we can also find songs in which she introduces electronic music. electronic or house. He released his first album in 1983, and since then many of his songs have reached number one on music charts in several countries, such as the songs "Like A Virgin", "Material Girl", "4 Minutes" or "Frozen". "Like A Virgin", "Material Girl", "4 Minutes" and "Frozen"..

Another curiosity that we can highlight of this great artist are her video clips, which in addition to using them as a marketing tool, throughout her career have also become pieces of art.

Madonna is the great Queen of Pop.

Cèline Dion is a Canadian singer and actress, known in the genres of pop, dance, and R&B. romantic ballad,pop,dance and R&B genres. During her adolescence she released several French albums in her native country, but it was not until 1990, with the release of her album "Unison", that she began to gain popularity and started her professional career in the world of music.

In the 90's she was crowned as one of the most successful singers in history, due to the fact that during the 80's she sold more than 100 million records. She has also won numerous awards: 5 Grammys, 12 World Music Awards, 2 Oscars, 7 Billboard Music Awards, 6 American Music Awards, 20 Juno Awards and 50 Felix Awards, among many others.

"The Power Of Love", "I'm Alive", "It's All Coming Back To Me Now", "Because You Loved Me" or "My Heart Will Go On" are Cesar's most played songs. are Céline Dion's most listened to songs on platforms like Spotify.

Maria Olvido, artistically known as Alaskais a Mexican singer, producer, composer and actress, although she has developed practically all her musical career in Spain, where she moved to live with her parents when she was 10 years old.

In 1979 she formed part of the group, as vocalist and composer, of Alaska y los Pegamoideswith whom she reached number one with the song Bailando. She is currently a member of the group Fangoriaan electronic music group that she joined in 1989. He has also participated in numerous Spanish television programs.

She is a singer and actress of Australian origin whose beginnings in music occurred when she was in high school, as she was part of a group called. "Soul Four"..

Cyndi is a pop icon Cyndi is known for her influence on music during the 80's, her flamboyant dress and her incursion into different musical genres.

Some of her best known songs are: "Girls Just Want to Have Fun", "She Bop", "Time After Time", "Money Changes Everything", "All Through the Night". In addition, she holds the record of being the first artist to place in the top ten of the charts. 4 consecutive songs in the top 5 of the "Billboard Hot 100" magazine..

She is considered as the Latin artist who laid the groundwork for an entire generation of Latin singers.. In addition, she is one of the best female singers of the 80's to have a star on the Hollywood Walk of Fame. Also, the British newspaper "The Sun", ranked her in the 13th position of "The 50 singers that will never be forgotten".

Her beginnings in music took place when she joined the group "Miami Sound Machine". The first album in which Gloria Estefan participated was titled "Renacer/Live Again".. She also released the album "Primitive Love" in 1985, which sold 5 million copies.

Undoubtedly, another of the best female singers of the 80's is Stacey Q, who in 1985 signed a contract with the independent label "Spot Records" and released "Shy Girl". In total she sold approximately 100,000 copies of several singlesShe was noticed by several well-known record labels. In 1986 she signed a contract with Atlantic Records.

Her greatest success began after signing with the aforementioned label, where she produced her breakthrough single "Two Of Hearts", which occupied the number 3 position in the Billboard Hot 100..

Deborah Ann Harry, known artistically as Debbie Harry is an actress, philanthropist, multi-instrumentalist, songwriter and singer, known for being the lead vocalist of the band "Blondie. This band began to reap success in the 70s and later, in the 80s. Their first hit was "In The Flesh".

Throughout history Debbie sold millions of copies of her singles and LPs, and toured with the band throughout the world. Europe, Asia, Oceania and North America. Later, she decided to start her solo career and collaborated with several artists, among them , Franz Ferdinand, Fabulosos Cadillacs, The Ramones, The Ramones, Andy Summers, Systema Solar, Nick Cave, Thompson Twins and Iggy Pop.

Even some of the best female singers of the 80's continue to delight us with their incredible voice and music, so if you have the opportunity to go, don't miss some of their great concerts around the world. Maybe some of the singers on the list will have concerts in your country very soon.

add a comment of Best female singers of the 80's