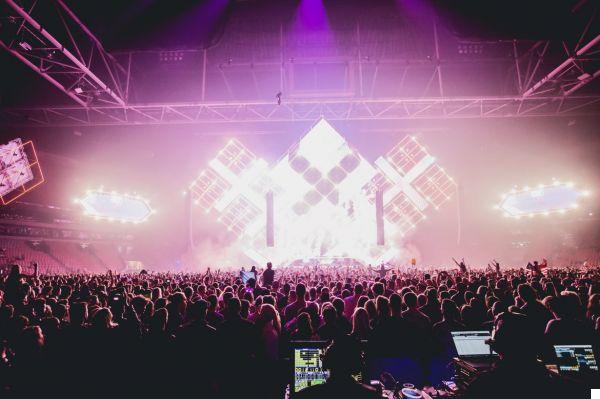 Festival-goer, this is your post! The festival culture is widespread in all continents, and surely, in every country you visit, you will find one that matches your musical tastes. That's why today from Topfestivalswe present you the best and most famous music festivals in the world.

The 11 best festivals in the world

Attending, once in a lifetime, one of the best festivals in the world is one of the dreams shared by music lovers. Today, from Topfestivalswe do not close ourselves to a genre or a continent, but we go big, to present you the best and most famous the best and most famous music festivals in the world.Do you have an idea of what festivals are going to appear in this list? Undoubtedly, they all share a unique and unforgettable experience, are you really going to miss them?


Glastonbury is a performing arts festival, which is held annually in PiltonSomerset, in EnglandIt is internationally known for its contemporary music, and for the presence of other arts such as dance, theater, circus and cabaret, among others. It is worth mentioning that it held its first edition fifty years ago, in 1971.

This festival has counted in all its editions with the main pop-rockartists of the moment, although you can also listen to other genres like reggae, electronica, folk, indie, rock o punk rock.

To give you an idea, artists such as Pharrel Williams, Katy Perry, Bastille, Wolf Alice, Ellie Goulding, Alt-J or The Chemical Brothers., are some of the artists that made up past editions of the festival.


The festival Tomorrowland is the giant of dance, the best electronic festival in Europe. This event is celebrated annually, since 2005, in the locality of Boomin Belgium.

This festival, in which you will be able to enjoy styles from the EDM at HardstyleThe festival, in each of its editions welcomes electronic music lovers from around the world, bringing together more than 400,000 people, and has also been crowned as the largest music festival in the world.

Just to give you an idea, artists such as Dimitri Vegas & Like Mike, Armin van Buuren, Carl Cox, Hardwell, Martin Garrix, Axwell Λ Ingrosso, Afrojack, Alesso, Alok, Bassjackers, Black Coffe or David Guetta, are some of those who have been on the stages of Tomorrowland in past editions.

What music and festival lover has never dreamed of going to Tomorrowland? It is undoubtedly one of the most famous music festivals in the world.

Sónaris a music festival that has been held for more than twenty editions in the city of Barcelona. Since its inception it has had a great impact contributing greatly to the cultural tourism sector, where it has come to contribute, on occasion, 52 million euros.

A festival that, in addition to offering electronic music from the hands of renowned artists, presents an urban and avant-garde format, incorporating also experimental music.

And if besides liking this type of music, you also like technology or other types of art, Sonar always brings other types of activities parallel to the concerts and sessions.

Holly Herndon, Dellafuente, Stormzy, Four Tet, Bad Bunny or THE MATTHEW HERBERT BREXIT BIG BAND, NOSTALGIA DE EUROPAare some of the artists who have been present in past editions of the festival.

The festival will return to its usual venues at Fira de Montjuïc and Fira de Gran Via on June 16,17 and 18, 2022. Are you in? You have to live the experience of attending one of the best and most famous most famous music festivals in the world!

In addition, at this festival, many celebrities from the film or fashion industry, as well as well-known influencers such as Dulceida, take the opportunity to show off their striking looks, based on what we mentioned earlier of the hippie decade.

The place where it is held is unmistakable and unique, as this festival takes place in the Coachella Valley. Coachella Valleywhich is located in the wonderful Colorado Desert.

To give you an idea, artists such as Ariana Grande, Travis Scott, Beyoncé, Eminem, The Weekend, Radio Head or Lady Gaga are some of those who have been present in past editions of the festival.

Burning Man is another of the most internationally known music festivals, and it is held in Indio, California. Black Rock Desert located in Nevadain Nevada, United States. This festival celebrated its first edition in 1986 and since then, it has not stopped gaining popularity to become one of thebest and most famous music festivals in the world.

In this festival you can enjoy, during the seven days of the event, the best electronic music. electronic music surrounded by more than 70,000 people in the wonderful and unique environment in which the festival takes place: the Nevada desert.

Something very curious and innovative about this festival is that during the days it lasts, its attendees create wooden constructions which are burned on the last days of the festival. Each year these structures are created on a central theme and attendees must open their minds and bring their own form of artistic expression.

Rock in Rio is a music festival that has been held every two years since 2011 in the city of . Rio de Janeiro, Brazil. This festival, known worldwide as the largest festival in the world, includes in its program a series of shows and concerts, mostly in the genres of pop and rock. It also has other editions held in cities such as Lisbon, Madrid, Las Vegas or Santiago de Chile.

To give you an idea, Nirvana, Shakira, Queen, AC/DC, Oasis, Iron Maiden, The Police, Amy Winehouse, Rihanna, La Oreja de Van Gogh, The Rolling Stones, Miley Cyrus, Beyoncé, Elton John, Britney Spears, Bruce Springsteen, Red Hot Chili Peppers, Metallica, Coldplay, Maroon 5 o Bruno Mars among others, are some of the artists who have passed through past editions of the festival.

Undoubtedly one of the most famous music festivals in the world, are you really going to miss it?

The festival Lollapalooza is one of the most popular events for any festival-goer. Its beginnings were in 1991, thanks toan idea of Perry Farrel, lead singer of Jane's Addiction. Although it took a break for several years, in 2003 it came back with more strength. In fact, it is now celebrated in various parts of the world as a festival of the year. Sao Paulo, Buenos Aires, Chicago, Stockholm, Santiago de Chile, Paris and Berlin..

Among the artists or groups that have performed at Lollapalooza we can mention the following Cold War Kids, Arctic Monkeys, Foo Fighters, Pearl Jam and Imagine Dragons.. At the beginning it was only a rock festival, but, as you can see, now there are several genres of music in this festival, even the great Lady Gaga has sung on its stage several times. You should go to this festival, whichever one is closer to you.

The Creamfields festival is mainly held in Daresbury, United Kingdom. However, nowadays you can enjoy Creamfields editions in different countries like Spain, Romania, Portugal, Argentina, Brazil, Peru, Chile, Ireland, Poland, etc. This already says a lot about the excellent logistics carried out by the organizers to present world-class artists to the public with high quality stages and sound equipment.

The artists and bands that have been part of the Creamfields lineup are very popular and focused on electronic music, e.g., the talented producer and DJ David Guetta or the incredible DJ Tiësto.. Imagine your favorite electronic artists on majestic futuristic stages with pyrotechnics and thousands of lights. You can find all this in any edition of the Creamfields festival in the world, so don't miss it.

Not to forget the Sziget Festival, an event that has been held on Óbuda Island, Budapest, Hungary every August since 1993. If you are in Western Europe, enjoy one of the biggest music festivals in the world! It has featured bands and artists such as Iron Maiden, Martin Garrix, Molotov, Placebo, etc.

The UMF of Miami is one of the events that you must enjoy in person if you travel to the beaches of this important tourist city in the United States. The event has changed locations, but it is usually held in parks near the beach, for example, Bayfront Park or Virginia Key Beach Park. Thus, if you go to the festival, you will be just a few miles away from the popular beaches of Miami.

It should be noted that this is an electronic music festival, so world-class artists have participated such as Alesso, Amelie Lens, Martin Garrix, David Guetta, Hardwell, Skrillex, Tiësto and many more. By the way, the UMF takes place at the end of March and lasts 3 consecutive days, however, tickets are always available several months before, get them now if you want to have an unforgettable experience!

Among the best festivals in Europe is NOS Alive, which takes place in Oeiras, Portugal. The event started in 2007It has been held for 15 editions and has been compared to Rock in Rio Lisbon or Super Bock Super Rock. And the truth is that it has nothing to envy to other rock festivals. Groups and artists such as Linkin Park, Pearl Jam, Smashing Pumpkins, Beastie Boys, Bob Dylan, Coldplay and Neil Young have participated in its editions.

The NOS Alive in 2022 lasted three days and had as headliners. Imagine Dragons, Metallica, Da Weasel (Portuguese band), and many more. and many more bands. As you can see, although the musical genres of this festival are based on rock, there are also interesting fusions such as rap-rock and pop-rock. Do you know Portugal? NOS Alive could be the perfect excuse to visit the country.

Finally, we can say that live music awaits you anywhere in the world, you just have to open your wings and get out of the routine. If you have already been to any of these festivals, comment below, how did it go, would you recommend any festival to other readers?

add a comment of World's best and most famous music festivals