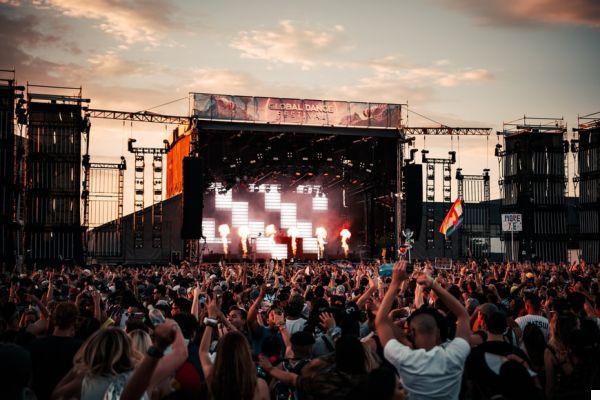 Have you ever travelled to the south of the Peninsula? If you haven't and you are a music lover, we recommend you to do it! The Costa del Sol is full of musical events of different styles but with a common goal, to make you enjoy the best music. That's why today from Topfestivales we bring you some of the best festivals in Malaga. Are you ready to choose your favorite?

Andalusia is an autonomous community located in the south of the Peninsula that has a wide variety of musical and cultural events, and also has some of the most popular festivals in Spain. But today in particular we are going to focus on a city with a very famous coastline, the Costa del Sol, do you know where it is? Well today you will find out, because we are going there to know the best festivals in Malaga . Stay tuned because this starts now!

Weekend Beach Festival is a music festival held annually, since 2015, in the town of Torre del Mar, Malaga. This event welcomes every year in its lineup the best artists, national and international, of the most varied genres: pop, indie, rock, trap, rap and many more styles!

This festival has been held for more than five editions and has had in its line-up artists like Black Eyed Peas, Vetusta Morla, Becky G, Morgan Heritage, Ska-p, Beret, The Original Wailers, Sigma, Rozalén, Ayax y Prok, Luz Casal, Dellafuente, Nathy Peluso, Los Aslándticos, Bad Gyal, Ozuna, Medina Azahara or Carlos Sadness, among many others. Are any of your favourite artists among those who have participated in this festival? You can tell us in comments.

It is worth mentioning that this festival is one of the best options and also one of the most popular in Andalusia as in each of its editions it manages to gather more than 150,000 spectators. Are you really willing to miss one of the best festivals in Malaga?

The Starlite festival has been held annually since 2012 in the city of Marbella, Malaga. This musical event has a daily program of concerts with a duration of two and a half months, which makes it the longest festival in Europe. It is also a very complete option as you can enjoy a wide variety of genres, from classical music to rock, pop and many other styles.

Apart from being able to enjoy long sessions of music, you can also live other experiences in other areas of culture such as cinema, fashion, art or gastronomy. A set of activities that make this festival a very complete one in terms of leisure and culture, and on top of that, it manages to bring together more than 250,000 people of very different nationalities!


To give you an idea, Starlite Marbella manages to bring together in its line-up a large number of national and international artists such as: Sting, The Beach Boys, Diana Krall, Eros Ramazzotti, Juanes, Jamie Cullum, Juan Magan, Taburete, Pablo Alborán, Dvicio, Beret or India Martínez, among many others.

If you are interested in this option, we inform you that you can find tickets from 19 euros for a seat in Tribune C to 171 euros for the Gold Boxes or up to almost 500 euros for the Platinum Box, although this varies depending on the concert. Do you think this is one of the bestfestivals in Malaga?

Los Alamos Beach Festival is one of the most popular electronic music festivals on the national scene. This festival arrived in 2015 in Estepona, Malaga, where since that first edition managed to bring together more than 40,000 attendees. Its lineup, in each of its editions, usually brings together the best artists, national and international, from the world of electronic music.

And don't worry because this event has a place for all styles of electronic music, as there are mainstream and underground dance music stages, as well as a stage in the pool, attractions, food stalls and much more.

To give you an idea, artists like Abel the Kid, B Jones, CYA, Javi Reina, Mix & Noise, Sansixto, Sunnery James & Ryan Marciano, Will K, Armin Van Buuren, Steve Angello or W&W, are some of those who have been present in past editions of Los Alamos Beach Festival.

Terral is a music festival held annually since 2008 in the city of Malaga itself and usually takes place in July, when the terral blows, hence the name of the event.

Specifically, most of the concerts and shows take place in the Cervantes Theatre, although others also occupy spaces such as the Echegaray Theatre or beaches like La Araña or La Malagueta. There are also shows in the street.

And do you know what the best thing about it all is that this festival is not focused on any one type of music, so it offers a wide variety of music for many of you regardless of your preferred style. You can listen to genres such as new age, pop, rock, electronic, jazz or blues by national and international artists.

To give you an idea, Rufus Wainwright, Mariza, The Chieftains, Ute Lemper, Paquito D'Rivera, Michel Camilo, Tomatito, Rúben Blades, Salvador Sobral, Jorge Drexler, Teresa Salgueiro or Rocío Molina, are some of the artists who have already passed through the venues occupied by Festival Terral.

Chanquete World Music is a music festival that has been held five editions in a row in the town of Nerja, Malaga. The festival is usually held in the month of August, on the beach of El Playazo, so in addition to enjoying music you can also enjoy sand, sun and sea, the complete combi, right?

Do you think this is one of the best festivals in Malaga? Of course we assure you that it is one of the most complete in terms of genres. If you are interested from Tofestivales we tell you that you can find general tickets from 25 euros.

Ojeando is a music festival that since 2009 brings together in the town of Ojén, in Málaga, the most important pop, rock and indie artists of the national scene.

To give you an idea, artists like Novedades Carminha, Rayden, La Bien Querida, Los Punsetes, Cariño, Floridablanca, Emmete, Alejados, Jammin Dose, Las Dianas, Primatah, Cala Vento or Los Nastys, are some of those who enjoyed their concerts in the 2019 edition.

It is clear that Ojeando is a unique option, as you can enjoy the best of independent pop rock in an idyllic setting, and is that this festival allows you to see live bands of first level of the national scene within the urban area of a typically Andalusian village. Are you going to miss it?

Have any of these music festivals in Malaga become your favourite? You can tell us what you think in comments ;)