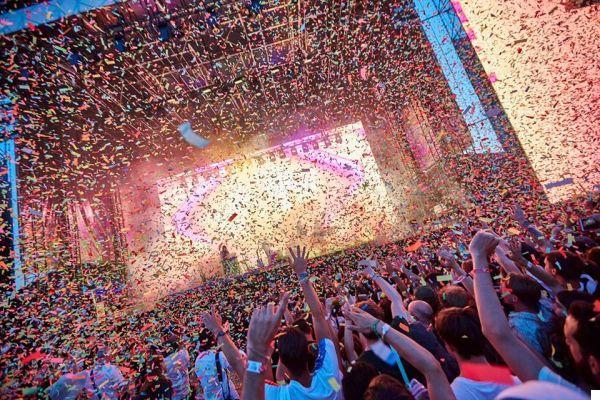 Do you like Latin music? Then get ready to know the most outstanding events in the country that will make you enjoy musical genres such as reggaeton, cumbia, salsa and even tango.

But before deciding which festival you are going to go to, it is better that you know the whole offer so that you can really choose the most appropriate option. Therefore, in this article we are going to review the best Latin music festivals in Spain.

Latin music began to gain popularity in Spain in the 1990s, when South American immigrants began to arrive and made their music known. The historical ties that unite these regions, such as language, meant that styles such as reggaeton, bachata and salsa quickly took hold in Spain.

During the 2000s, Latin rhythms made the leap to commercial music and today it can be said that they occupy a central role in the Spanish music scene. So much so that it is difficult to find a nightclub where you can't hear a reggaeton song. Even so, here are 10 Latin music festivals in Spain.

During the last few years, the Madrid Puro Reggaeton Festival has been held in June. This event brings together for two days thousands of people passionate about Latin rhythms to enjoy artists of the caliber of Juan Magan, Natti Natasha, Daddy Jankee or Bad Bunny (these are some of the singers who visited the festival the previous year).

Normally, this festival was held at Ifema, but the last edition was moved to the Caja Mágica.

It is a different weekend in each of these locations, so that more than a festival could be considered a huge traveling party where you can "perrear" the biggest hits of reggaeton.

In past editions, Karol G, Don Omar or Don Patricio, among many others, performed at this festival. In addition, attending the Puro Latino Fest can be the ideal excuse to visit some of the cities where it is held.

The Arenal Sound is a festival that is organized every August in Burriana since 2010, and has become one of the most famous festivals in Spain. The Arenal Sound, unlike the previous ones is a real festival, ie, has a camping area for attendees, showers and toilets and food caravans, so that in the days of the festival you can stay there. And thanks to this, the total price of the festival is quite reduced.

On the other hand, we have to say that the Arenal Sound is not a Latin music festival as such, since there are also electronic, Spanish pop-rock, indie artists... But as this festival has a multitude of artists, many of them are dedicated to the famous reggaeton. That is why we can include it in this list.

The Granada Latina festival is held at the end of June and only lasts one day. That is to say, more than a festival it could be considered a big concert of several artists. Even so, this event brings together many of the best urban and Latin artists.

So if you want to enjoy all the fun of a reggaeton festival concentrated in a single festival, this is the ideal occasion. And you know what they say, the best fragrances come in small bottles.

Holika is another of the best Latin music festivals in Spain. This is a great festival held in Calahorra at the end of June or early July, depending on the year. The first time it was held was in 2017, and despite its young age it is already considered one of the most famous festivals in Spain.

And this festival has a very high number of performances, and not all of them are reggaeton. In fact, this festival is quite varied and knows how to perfectly combine electronic music, Spanish pop-rock and urban and Latin rhythms. And at Holika you can also choose the option of camping there and live an authentic festival experience.

The Bachata Spain festival is a musical event held at the Barceló Hotel in Punta Umbría (Huelva). In this festival you can dance all kinds of Latin rhythms, from bachata, salsa and merengue to reggaeton or cumbia.

The interest of this festival lies in the fact that the music you will hear is not limited to the most commercial Latin songs, but in Bachata Spain they bet on lesser known artists, but just as talented. This is why it is a unique opportunity to get to know Latin music in depth and discover new artists.

Vive Latino is a festival where Hispanic-American music culture is honored. This festival is celebrated in several South American countries and now it has arrived in Spain, more specifically in Zaragoza.

It fuses current Spanish music with the best artists from South America. And although it is an event where Latin artists have a lot of weight, it also tries to keep a space for local singers and bands. The Vive Latino festival is held in Zaragoza in September and, in short, it is an ideal occasion to enjoy the best Latin and Spanish artists.

A lo Dominican festival is a musical event held in Lloret de Mar (Gerona) and manages to recreate the musical atmosphere of the Dominican Republic. And in this festival, apart from being important music, dance plays a central role.

The musical styles that you will hear there are mainly merengue and dembow . And the best thing is that this festival is held in a hotel in Lloret de Mar next to the beach. So, besides dancing merengue, you will be able to relax in front of the Mediterranean waters.

This festival is held at the end of June at Ifema (Madrid). Love the tuenti's is an original and hilarious festival where many of the hits that sounded during the 2000's are remembered and interpreted live by their singers.

This festival concentrates all the musical styles that were heard in the 2000's: Spanish pop like Alex Ubago or Pignoise, and more Latin rhythms like Alberto Gambino.

We finish this review of the best Latin music festivals in Spain talking about Cullera Tango Festival. Tango is one of the most representative musical genres of South America, more specifically Argentina. And equally, or even more, important is the dance that accompanies this type of compositions. It is said to be one of the most romantic dances in the world, and you can check it out if you go to the Cullera Tango Festival.

This festival is held in this Valencian city at the end of October and for four days is a real tribute to the tango. In addition to playing the best tangos, there are also dance classes and workshops with the best teachers. And of course, in the Cullera tango festival you will find tango exhibitions by prestigious dancers.

add a comment of Best Latin music festivals in Spain