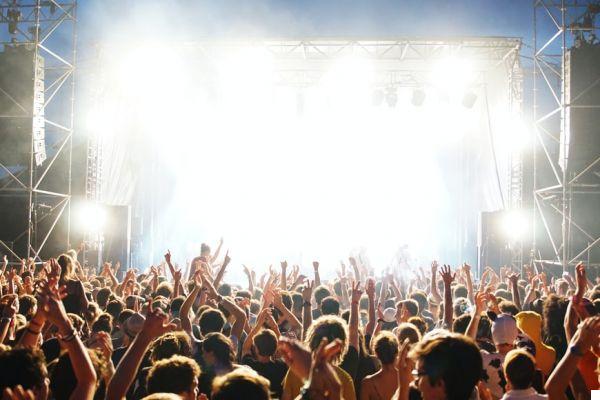 Have youever travelled to the Basque Country? Do you know that it is a community that offers a wide variety of festivals?

If you are a music lover, no matter the genre, today from Topfestivales we invite you to know some of the festivals of one of its main cities: Bilbao. Are you ready to know the best music festivals in Bilbao. Are you in?

Basque Country is an autonomous community that offers a wide variety of festivals among its cities, making it a perfect destination for music lovers. Are you one of them? Then open your ears!


Because today, from Topfestivales, we bring you a selection of the best music festivals in Bilbao, so you can discover new events in other areas of the country. Are you ready, because it starts now!

Bilbao BBK Live is a music festival held annually since 2006, in its first edition, in the city of Bilbao. Specifically, the event usually takes place on the slopes of Mount Cobetas, a natural environment located southwest of the capital.

This event usually takes place around July, and you can enjoy pop and rock music, but also other styles such as hard rock, indie or even electronic music. As you can see, a festival for almost all musical tastes!

To give you an idea, The Strokes, Rosalía, Suede, Nadia Rose, Nathy Peluso, Cupid, Liam Gallagher, Vetusta Morla, Hot Chip or Weezer, are some of the artists who have been present in past editions of Bilbao BBK Live, among many others.


Undoubtedly, this festival is one of the most popular in the country and one of the best music festivals in Bilbao, as in each of its editions manages to gather more than 110,000 attendees. Do you dare to know it?

Bizkaia International Music Experience is its full name, although everyone knows it by the name of BIME. This is another of the best music festivals in Bilbao that take place in the city, specifically at the Bilbao Trade Fair.

This event is considered one of the best indoor music festivals of the moment, and in each of its editions it manages to bring together around 20,000 attendees. And all this in a surprising venue, the BEC, which will surprise you with its exceptional architecture.


In addition, you can also enjoy other activities parallel to the concerts of the artists, as the festival has a fair aimed at the music industry, the only one of its kind in Europe.

To give you an idea, artists such as Foals, Kraftwerk 3D, Floatings Points Live, Amaia, Morgan, Phantogram, Aitor Etxebarria, The Divine Comedy, Carolina Durante or Helena Hauff, are some of those who have performed at BIME.

So, are you ready to live the experience of enjoying one of the best music festivals in Bilbao?

More festivals in the Basque Country that you should know about

The Basque Country is very famous for its good food but also for hosting great music events. If these two festivals in Bilbao have convinced you, here are some more festivals that are held every year in this community. Do you want to discover them?

The MAZ festival has been held annually since 2012 in the town of Basauri. This event usually takes place in the month of May, and you can enjoy the best alternative music, as it always offers a proposal that combines the best indie music.

Most of the concerts of this festival usually take place in the Teatro Social Antzokia, although you can also find other events and free concerts in the Plaza Solobarria.

To give you an idea, Iseo & Dodosound, Viva Suecia, Russian Red, Nacho Vegas, Cristina Rosenvinge and Mike Farris are some of the artists who have performed at the festival in past editions.

Did you know about this festival? You can tell us about it in the comments ;)

Azkena Rock Festivalsis a festival, as its name suggests, held in Vitoria, Álava, since 2002. This event, which already has 18 editions, is organized by the same promoter that organizes other festivals that we have talked about before, such as Bilbao BBK Live or BIME.

Here you can enjoy the hardest rock styles such as punk, hard rock, heavy metal or stoner rock, among others. In addition, something that characterizes this festival, is that it is one of the few that offers in its lineup rock bands away from the mainstream audience, but at the same time are well known at the underground level.

The Who, John Fogerty, Iggy & The Stooges, Wilco, Alice Cooper, Scorpions, ZZ Top, Social Distortion, Tool, Queens of the Stone Age, Ray Davies or Bad Religion, are some of the bands that have been present on the stages of Azkena in past editions.

It should also be noted that although the festival has two stages, its programme does not overlap one with the other, so you can attend all of them without missing any of them.

So, do you want to get to know one of the best festivals in the Basque Country?

The Euskal Herria Zuzenean festival is a music event that has been held since 2006, although it has changed locations over time. While until 2007 it was held in Arrossa (lower Navarre), in 2008 it moved to Idaux-Mendy, in Zuberoa, and finally in 2009 it was held in its current location in Hélette.

In this event you can enjoy the best rock-pop-rock music, as the best international and local rock bands parade through it. In addition, you can also enjoy other types of shows or debates and talks about different topics that are addressed in each of its editions.

Chill Mafia, Ruper Ordorika, Potato, Kuartz, Tremenda Jauría, Zea Mays, Olatz Salvador or Torheit, are some of the artists who participated in its last edition.

And you, what do you think? Do you think this is one of the best festivals in the Basque Country?