The best festivals in Argentina 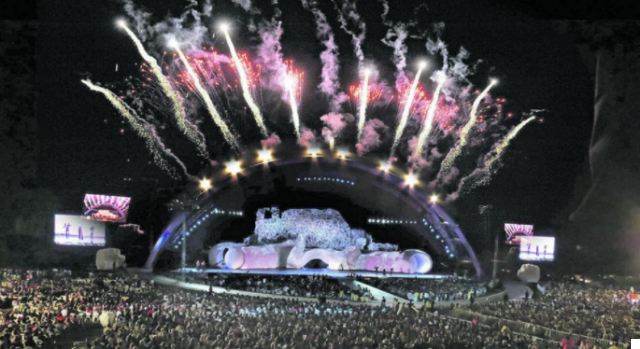 Do you want to know which are the best festivals in Argentina? In TopFestivales we bring you the list of the best festivals that you can't miss. Rock, electronic, pop, indie, even folklore and tango in the most outstanding festivals, national and international, of a country that you should not miss.

7 festivals in Argentina that you have to know

Here we bring you the best national and international festivals in Argentina for all tastes. Lollapalooza, Creamfields, Cosquin Rock, Cosquin Folcklore, La Fiesta del Sol, El Mundial de Tango and the Carnivals of Gualeguaychu. A potpourri of the most varied so that you have no excuses. If you want to get to know a country, what better way to do it than by partying... Avanti!

Argentina's Lollapalooza festival is not an event, it's an EXPERIENCE . Lollapalooza is known as "The festival that changed the world" and that's what it's all about in Argentina. It is the only international festival with a musical line up of more than 50 artists on multiple stages.

In addition to the best music in the world, Lollapalooza offers thebest gastronomic spaces, alternative activities between shows and areas to relax.

Lollapalooza Argentina takes place in the province of Buenos Aires at the San Isidro Racecourse. With five simultaneous stages surrounded by an outdoor green space, the festival lasts 4 days. It is characterized by the variety of national and international artists and by the variety of musical styles such as rock, indie pop, reggae that it presents every year. Undoubtedly, a must for those who enjoy good music.

Creamfields BA is considered one of the best electronic music festivals held annually in the city of Buenos Aires, Argentina. Creamfields BA has become a massive event attended by audiences from all over the world, breaking records in attendance with more than 70,000 people internationally.

The festival lasts 4 days at the former Ciudad Deportiva Boca Juniors in Costanera Sur, an open air green field on the coast of the Rio de la Plata.

It is the most important folk music festival in Argentina. This festival lasts nine nights (las nueve lunas Coscoínas) and takes place the last week of January, in the city of Cosquin in the touristic Punilla Valley, province of Cordoba, Argentina. The Cosquin festival has been sponsored by the Organization of American States (OAS) for its cultural importance in the Americas.


In the Cosquin festival the music is not only in the main stages where the national musicians delight us with the best folklore of the country, during the nine moons the streets of Cosquin are filled with festivities "folkloric peñas" street, where dancers and guitar players interact with the public.

The Cosquin Rock festival is held in the province of Córdoba and is one of the most important rock festivals in the region. It is attended by rock bands from Argentina and other countries, especially Spanish-speaking ones.

The relevance of this event has brought almost 120,000 people to enjoy more than a thousand artists for three days. The festival takes place in the open air between the hills of Cordoba.

The Cosquin Rock has been attended by figures such as: Andrés Calamaro, Los Pericos, Zona Ganjah, Andrew Tosh, Dancing Mood, Roddy from The Specials, Creedence Clearwater Revival, Skay y los Fakires, Godwana, Las Pelotas, Ciro y los Persas, Los Cafres, Molotov among many others. If you like rock, there is nothing better than some good concerts in the mountains of Cordoba. And enjoy rock and roll!

The Tango World Festival takes place in the city of Buenos Aires, Argentina. The festival gathers tangueros from all over the world, great referents and fans of the genre. During the month of August the event displays multiple activities: concerts, exhibitions, classes, lectures and of course, the World Tango Championship, the most important international dance competition. There are 556 couples from 37 countries from all over the world competing.

Undoubtedly, you will find the best tango festival in this world championship . With all the power of the genre, its history, its creators and its public, the tango marks the pulse in the city of Buenos Aires, because as the song says "That's the tanto, song of Buenos Aires/Born in the suburb that today reigns all over the world". You know, a unique event for those who like to soak up the culture of tango.

Argentina's best carnival festivals are in Gualeguaychu, province of Entre Rios. Hundreds of protagonists on the catwalk, twelve imposing floats and the creativity and talent of a magical show of color and joy. An incredible and majestic show with its own stamp.

The Gualeguaychu Carnivals can be enjoyed during the month of February. This is a time when the region is full of parties and colors in the squares and streets where the carnival spirit is alive and kicking.

If you want the best Carnival festival in Argentina there is no doubt that Gualeguaychu is what you are looking for.

The National Festival of the Sun

The Festival known as La Fiesta del Sol, is the most important celebration in honor of the sun in Argentina. It takes place annually in the province of San Juan, during the last week of February, for five days.

This festival contains an itinerary of cultural activities with musicians and dance artists, a parade of carriages and important thematic exhibitions accompanied by shows with national and international artists.

In the festival the national ambassador of the sun is chosen and a mega exhibition is held, where the theatrical, choreographies, lights and sounds are the main protagonists. The festival also includes a thematic fair with typical gastronomic stands of the province of San Juan.

The closing act of the festival consists of an impressive light and sound show, with more than 300 artists on stage on a big stage. The show ends with an impressive display of fireworks and dances. An experience you can't miss.

add a comment from The best festivals in Argentina