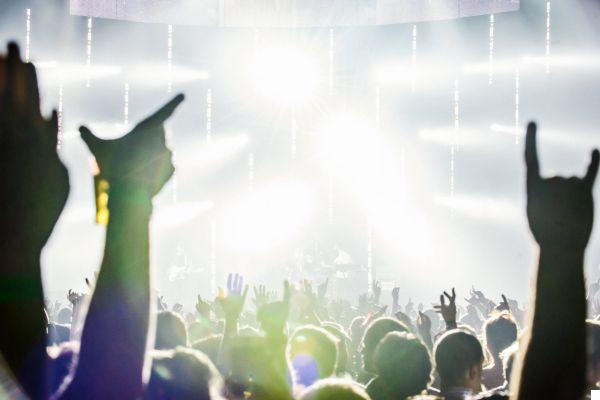 Are you a rock lover? Today, in Topfestivalswe will travel through different times and places in history to make a review of some of the most important female female rock singers.

Female figures who, thanks to their great passion for this genre, left us great songs that have reached our days. Do you want to discover who they are? Here we tell you about them.

Women rockers with history that you should know

If your answer is yes, you are a lover of rock. rockthis article will make you expand your musical knowledge about this daring musical genre even more.

Today, in Topfestivalsyou are going to discover some of the female rock singers who have made a long way in the rock industry. These figures managed to prove that being a "bad ass" is not only for men. Are you ready, because it starts now!

Joan Jett is one of the best female rock singers. She is an American singer, songwriter and producer. rock, hard rock and punk rock. She is popularly known for being the creator of one of the anthems of the genre, the song I Love Rock 'N Roll, which was number one on the Billboard charts until May 8, 1982. She has also been a vocalist in the groups: The Runaways and The Blackhearts.

During her career, she has often been named with titles such as "The Runaways" and "The Blackhearts". Queen of Rock 'n' roll o Grandmother of PunkShe is also one of the most important female figures in the history of rock music. And she has even shared the stage on numerous occasions with established artists such as The Ramones and Van Halen.


Some of her most listened hits are I Love Rock 'N Roll, Bad Reputation, I Hate Myself for Loving You, Cherry Bomb, Do You Wanna Touch Me or I Love Playing with Fireamong many others.

Tina Turner is an American singer and songwriter, although of Swiss nationality, who developed her career as an artist for over fifty years, becoming one of the greatest rock components in history.

Her long musical career began in the 1950s as a singer of Kings of Rhythm (her husband's band) and later in 1958 she began recording songs under the name of Little Ann.

What's Love Got to Do with It, The Best, Proud Mary, Stay Awhile, A Fool in Love or Falling like Rain, are some of the most internationally known hits of this great woman rock singer.

Lita Ford She is a British rock singer and guitarist, specifically in the styles ofheavy metal, glam metal and hard rock .This artist reached great popularity during the 80's eraTheRunaways, that era of which we have spoken in previous posts, and where great artists emerged, and part of this came for having been part of the rock band The Runaways.

In 1979 is when this artist began her great solo career, and in 1983 she released her debut album Out for Blood, which did not get a good position in the market. But in 1984 she released another album, Dancin' on the Edgewhich achieved a greater repercussion, specifically one of the songs included in it, Fire in My Heart, managed to reach other countries as one of the top 10.

Close My Eyes Forever, Kiss Me Deadly, Playin' with Fire, Shot of Poison or Falling in and out of Love, are some of the most famous songs of this great artist and female rock singer. Do you know this iconic figure?

Amy Lee is another of the most interesting female rock singers. An American singer and songwriter, as well as a pianist, who is the lead singer of the American band of alternative metal known as Evanescense.

In the year 2006 she was ranked 69th among the 100 best metal vocalists of all time of all time by Hit Parade magazine, and her band was also chosen as the best metal band by Rolling Stone magazine.

The songs that he composes revolve around the alternative rock genre, specifically the styles of post-grunge, gothic metal and alternative metal.The band has sold more than a million albums.

Some of his best known songs are Love Goes On and On, Sally's Song, Lockdown, Sakura Rising, Speak to Me or Love Exists, among others.Do you know any of them?

Dolores O'Riordan was an Irish singer and songwriter who was the lead singer of the alternative rock band alternative rock band The Cranberries. She began to be vocalist of this group in 1990, and they were active until 2003 when the band decided to take a break. From that moment Dolores began her solo career.

Her solo career began with the release of the album Are You Listening? which was released in May 2007 and was a great success. It is also worth mentioning her characteristic mezzo-soprano voice and for her strong Limerick accent.

So unique is her voice that Billboard named her as one of the most recognized female voices in alternative music, as did Rolling Stones who described her as vibrant and unique.

Songs such as Ordinary Day, When We Were Young, Turandot, Human Spirit or Linger, are some of the most known and listened to of this great artist on platforms like Spotify.

Alanis Morissetteis another of the most outstanding female rock singers. A Canadian singer, songwriter and guitarist who has had great success in her professional career since the 1990s. This singer focuses her works towards the alternative rock genre , specifically towards the styles of rock, post-grunge or pop. pop rock, post-grunge or pop folk, and has positioned herself in the market as one of the best-selling artists in history.

Specifically, her album Jagged Little Pill has been one of the best-selling, as it has come to exceed 33 million copies sold worldwide, becoming in turn one of the best-selling albums by a female artist. In addition, she has been awarded seven Grammy Awards and in 2002, the UN awarded her the Global Tolerance Award for her great work promoting tolerance.

Some of her most played songs are Ironic, You Oughta Know, Hand in My Pocket, Thank U or Head over Feet, among others.among others. Listen to them and check if this female rock singer deserves to be in your playlist.

Janis Joplin is one of the best and most influential artists of all times and we couldn't and we could not fail to include her in this top. She is also the first female rock and roll star and her records are among the best sellers in the music industry.

The band stood out for the ability they had to venture into other musical genres such as reggae, jazz, pop reggae, jazz, pop, funk, disco and punk.. Years later, Harry decided to launch his solo career and become part of the acting industry, making several films. Also, throughout his musical career he collaborated with artists and groups such as: Los Fabulosos Cadillacs, Andy Summers, Systema Solar, Franz Ferdinand, Thomson Twins, Nick Cave and The Ramones.

Christine Ellen Hynde, better known artistically as "Chrissie Hynde", is a songwriter, guitarist and one of the female rock singers who founded the popular 80s band "The Pretenders with whom she recorded more than 10 albums. The band's most popular songs are: "Don't Get Me Wrong" and "Back on the Chain Gang".

In 2005 the group was inducted into the Rock and Roll Hall of Famebut the ceremony was only attended by Chrissie and Chambers. On the other hand, you should know that Hynde is a feminist and animal rights activist. In this same sense, she belongs to the organization PETAwhose operations center is located in the United States.

She is an American composer, guitarist, bassist and singer known in the music industry for having been part of several musical projects among which stand out Pixies and The Breeders. In addition, Deal has collaborated with artists such as Chris Bell, Tanya Donelly, Sonic Youth and Tijuana No!

When he was part of Pixies he received credits for the first 2 albums. "Come on Pilgrim" and "Surfer Rosa".in which he participated as bassist. Later, the band went into a period of inactivity, so Kim decided to form The Breeders. With this group he released one of the most popular rock albums, "Last Splash"..

She is one of the female rock singers who formed in 1981 the band "Sonic Youth" with which she released 6 studio albums under the label DGC Records. Besides being a singer, she is also a bassist and guitarist, so her musical knowledge is quite complete. Also, you should know that she was the leader of the group "Free Kitten" and has collaborated with several artists, for example, Lydia Lunch, Ikue Mori, Chris Corsano and Alan Licht.

On the other hand, Gordon excels as a writer, in fact, she has written several essays as well as articles that have been published. For example, "Activisms at 33 Revolutions", text belonging to the catalog of the "Pop Politics Exhibition". In 2014, the group "Sonic Youth" dissolved and 5 years later (2019) she released her first solo album entitled. "No home record". You should go to some concert of hers.

Intense sounds of electric guitar and voices that envelop you, the rock of these singers is a thing apart. Therefore, if you like this musical genre, don't miss to go to any performance of the best female rock singers, of course, we mean the ones that are still active.